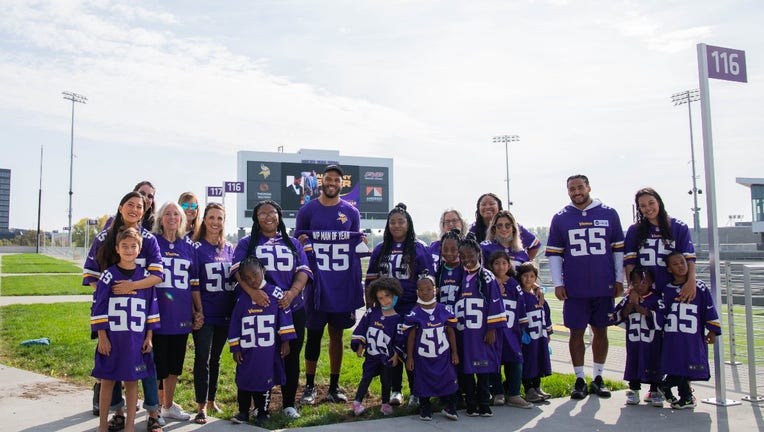 MINNEAPOLIS - The NFL and Minnesota Vikings announced Tuesday morning that linebacker Anthony Barr is the team’s 2021 nominee for the Walter Payton Man of the Year Award.

The honor, considered the NFL’s most prestigious honor, goes annually to a player for outstanding community service efforts off the field, as well as excellence on the field. Barr is one of 32 nominees announced on Tuesday.

Eric Kendricks, the team's nominee for the 2020 season, presented Barr with a glass trophy for the honor Wednesday morning.

"It’s a big honor. Obviously community work has been a big part of my life for a long time. The Raise the Barr Foundation is kind of built on a story of my mother and myself. She’s a huge inspiration to me and my life, and I’m really looking to pass it forward to future generations. I’m humbled and honored," Barr said at TCO Performance Center Tuesday morning.

Barr has been active in the Twin Cities community since being drafted by the Vikings in 2014. He established the Raise the Barr Foundation with his mother, Lori Barr, in an effort to increase economic mobility for students who are single parents, giving them resources to complete their education and raise a family.

"Anthony consistently represents the best of the Minnesota Vikings within the community," Vikings Owner and President Mark Wilf said in a statement. "His leadership on the team’s social justice committee, his commitment to organizations like the Jeremiah Program and his investment of time and resources through his Raise the Barr Foundation is inspiring. We are proud to recognize his efforts and name Anthony as our 2021 nominee for this impressive honor."

Barr held a holiday party on Monday at the Jeremiah Program in Minneapolis, helping dedicate the re-opening of five renovated computer labs. The Jeremiah Program aims to stop the cycle of poverty for both single mothers and their children, empowering low-income single mothers to excel in the workforce and beyond, provides their children with tools to succeed in school and reduces their family’s dependence on public assistance.

Barr is also on the Vikings’ Social Justice Committee, which aims to bring Twin Cities communities together to raise awareness for social justice issues. It’s come into the public light since the police killing of George Floyd in Minneapolis on Memorial Day in 2020. Barr is one of many Vikings’ players to establish a relationship with Minneapolis police to help create change, and has worked with NFL Commissioner Roger Goodell to figure out how the league and players can work together to address social justice issues.

The Vikings created the George Floyd Memorial Scholarship with a $125,000 endowment, generating about $5,000 annually to help African-American graduating high school seniors pursuing a post-secondary education. Barr was part of the event to award the first scholarship to Mimi Kol-Balfour.

On the football field, Barr was Mike Zimmer’s first draft pick in 2014 and led the Vikings’ defense in tackles 12 games into his rookie season. He earned Pro Bowl honors four straight seasons, and was Second Team All-Pro in 2015. Barr is tied for fifth all-time among Vikings’ linebackers with 15.5 sacks, and is fourth in team history among linebackers with 36 tackles for a loss.

"He’s an unbelievable person. No. 1, he’s got a great family. His foundation does terrific things for the community and for single moms. As far as a football player, when he’s out there everything is much calmer. He communicates so well with everybody, and he’s a good player," Zimmer said.

As a nominee, Barr will wear a Walter Payton Man of the Year decal on his helmet the rest of the season. All nominees will receive a $40,000 donation to give to a charity of their choice. The NFL’s choice for the award will be announced during the NFL Honors show on the Thursday before the Super Bowl.