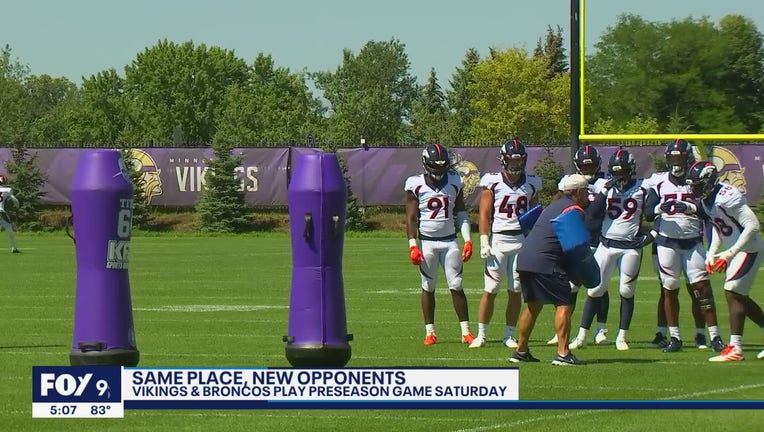 MINNEAPOLIS - Mike Zimmer said Wednesday he expects the next two days of Minnesota Vikings training camp to be a little "amped up" and players will be a ‘little bit cranked up" with the Denver Broncos in town for joint practices at TCO Performance Center.

The two squads will practice Wednesday and Thursday, ahead of Saturday’s first preseason game at U.S. Bank Stadium. The two days are a chance to get live reps against somebody that’s not a teammate, and get different looks with the regular season a month away.

The Denver Broncos and former Vikings quarterback Teddy Bridgewater were in town on Wednesday for a joint practice at TCO Performance Center.

It’s also another live evaluation for the coaching staff, with one less preseason game to work with. Adding a 17th regular season game in 2021 meant playing one less exhibition. The Vikings and Broncos will do individual work and team periods, but there won’t be much hitting.

"I think it’s another opportunity to be in a controlled situation where your guys aren’t tackling, you’re not falling on the quarterbacks, which could happen in a preseason game. I think you get a lot of good work done and you don’t really put guys in harm’s way as much," Zimmer said before Wednesday's practice. "They just want the same thing we do, we want good work against each other."

Zimmer said first round draft pick Christian Darrisaw is "probably out" for both practices against the Broncos. Darrisaw is still progressing from offseason surgery, and has been limited to individual work at training camp so far.

He’s not likely to play in Saturday’s first preseason game, and that leaves his status for Week 1 at Cincinnati uncertain. Rashod Hill is listed as the current starter at left tackle.

It’s also unlikely back-up quarterback Kellen Mond plays on Saturday. Mond is catching up from spending 10 days on the reserve/COVID-19 list, and Zimmer said he looked "rusty" on Tuesday.

HOW MUCH WILL STARTERS PLAY IN THE PRESEASON?

Zimmer said Wednesday he’s decided how much he anticipates starters will play in the preseason, and the coaching staff knows, but the rest of us will find out Saturday.

That includes quarterback Kirk Cousins, who came back last Thursday after five days on the reserve/COVID-19 list. He could get some snaps on Saturday, but the safer bet is he gets more time in the second game against the Indianapolis Colts.

"I want to play as much as they’ll let us play. We’re always going to get better from the reps, so it’s hard to not want to be in there and learning," Cousins said. "Even if you’re making mistakes, you’re making them in a time where it’s not going to hurt you. You’d rather go out there and make the mistakes in August than make them in September."

Zimmer said Greg Joseph will handle all kicking duties on Saturday. Joseph, who is 24-of-30 on field goals at training camp so far, is battling with rookie Riley Patterson for the kicker spot.

Zimmer also said he anticipates Danielle Hunter will get at least some reps during the preseason.

For the first time in nearly two years, U.S. Bank Stadium could have full fan capacity on Saturday. The Vikings took their practice last Saturday to the facility, and about 5,200 fans took it in. There will be thousands more this weekend, even if the game doesn’t count from a win/loss standpoint.

"It’s going to be great, we love getting fans in there. I know it’s a preseason game, but I hope it’s full. I hope they’re loud, they have a great time and bring their buddies," Zimmer said.