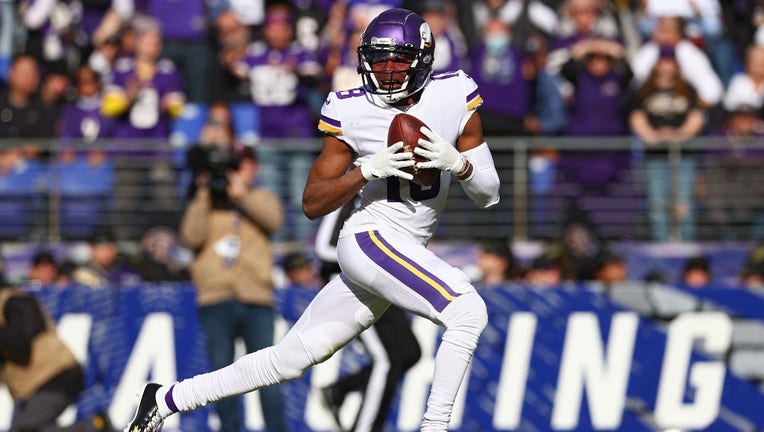 Justin Jefferson #18 of the Minnesota Vikings runs with the ball toward the end zone after a catch for a first quarter touchdown against the Baltimore Ravens at M&T Bank Stadium on November 07, 2021 in Baltimore, Maryland.  ((Photo by Todd Olszewski/Getty Images))

MINNEAPOLIS - There’s simply no way around it for the Minnesota Vikings. Sunday’s walk-off loss to the Detroit Lions put them in a precarious position for the NFC Playoffs.

The Vikings fell to 5-7 on the season after the Lions got their first win in 364 days. They’ve lost four of their six games coming out of the bye week. With five games to go, the margin for error to make the playoffs is razor thin. They’re currently in the No. 9 spot in the NFC, and the top seven teams make the playoffs.

After an embarassment on Sunday, the Vikings face a short week and a tough matchup at home versus a competitive Steelers team.

The Vikings host the Pittsburgh Steelers for Thursday Night Football, and the team said all the right things ahead practice on Tuesday at TCO Performance Center. It’s a game they simply have to win.

"I’ve never put my hands under center and not felt like it was a must-win ever, whether you’re 0-0 to start the year or in the position we’re in," quarterback Kirk Cousins said. "When I go up there and step between the white lines, it feels like a must-win to me."

The Vikings’ season truly has been a rollercoaster. They’ve been hit with injuries and COVID-19 issues on both sides of the ball. In 11 games, all but one has been decided by either one possession or come down to the final play.

They were driving to beat Cincinnati Week 1 before Dalvin Cook fumbled. Greg Joseph missed a game-winning field goal Week 2. Joseph redeemed himself two weeks later, kicking the game-winner against Detroit. The next week, Kirk Cousins hit KJ Osborn for a game-winning touchdown in overtime at Carolina.

They lost in overtime at the Baltimore Ravens, then Joseph again kicked them to a win over the Packers. Most recently, Jared Goff drove the Lions down the field and hit Amon-Ra St. Brown for a game-winning, walk-off touchdown.

Justin Jefferson, who had 11 catches for 183 yards and a score last week, is tired of losing.

"It’s time to go bring the pain to somebody else. Just show our frustration off last game, us not getting that win and us not playing as good in the first half. Just trying to get a win and bouncing back," Jefferson said.

Lose to the Steelers Thursday night, and conversations about offseason changes get even louder than they already are.

The Vikings were without five defensive starters in Sunday’s loss to the Lions. It appears they’ll be getting as many as three back on Thursday. Patrick Peterson was activated from the reserve/COVID-19 list on Tuesday, and was on the field in the portion open to media.

Eric Kendricks and Anthony Barr each missed Sunday’s game with injuries. Both were back at practice Tuesday. Barr, who has played just eight of 28 games the last two seasons, said he’s playing Thursday.

"It sucks, to put it simply. I feel like I was playing pretty good until I tweaked (my hamstring) against the 49ers. So it’s one of those things where I have to figure out how to stay healthy and get back on the field," Barr said.

Running back Dalvin Cook also walked out to practice with a helmet on Tuesday, but his status for Thursday’s game is unclear. He suffered a shoulder injury at the 49ers. Adam Thielen, who suffered an ankle injury at Detroit, did not practice on Tuesday.

VIKINGS HAVE TO SHAKE OFF BAD LOSS TO LIONS

The Vikings have no choice but to move on from losing to the Lions, even if the fans aren’t.

There are five games left, and there’s still a chance to get in the NFC Playoffs if they can go on a run. After hosting the Steelers Thursday, the remaining games are at the Chicago Bears on Monday Night Football, hosting the L.A. Rams, facing the Packers at Lambeau Field on Sunday Night Football and hosting the Bears to end the regular season.

"You really can’t dwell on what happened. Of course we were all mad and pissed off about it Sunday after the game. Monday come around, we prepare for the Steelers," Woods said.

"We have to be resilient. We have to choose to be tough, and find a way to get it done," Cousins said.