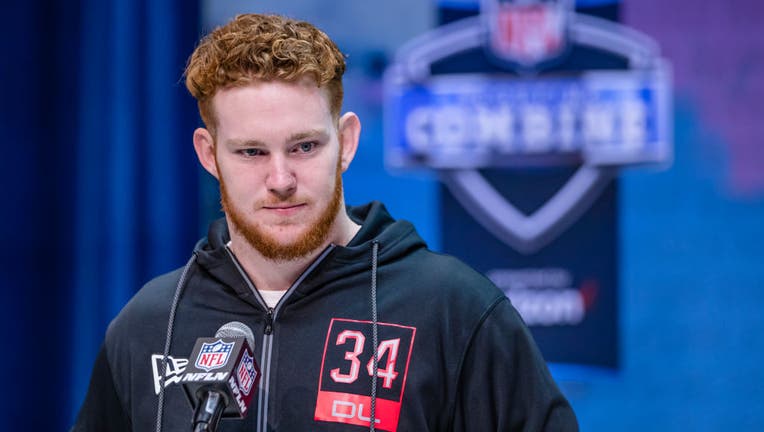 James Lynch #DL34 of the Baylor Bears speaks to the media on day three of the NFL Combine at Lucas Oil Stadium on February 27, 2020 in Indianapolis, Indiana. (Photo by Michael Hickey/Getty Images)

MINNEAPOLIS (FOX 9) - The Vikings defense underwent an overhaul this offseason, but one rookie is determined to see Minnesota keep its tough-nosed reputation.

“I think football is a defense game,” said James Lynch. “Whoever has a good defense, who can control the line of scrimmage and that sort of thing, kind of wins.”

The Vikings defense underwent an overhaul this offseason, but one rookie is determined to see Minnesota keep its tough-nosed reputation.

Several key starters and contributors are gone, so first-year players like Lynch will be expected to fill the void. Lynch said he was excited to do so on draft day.

“Whenever Minnesota came on the clock, I got that call and obviously I kind of went crazy because that was one of the teams that, really the team that I was excited to go to,” he said. “I told my agent that as soon as I met with them at the combine.”

Lynch comes to Minnesota as the reigning Big 12 Player of the Year and he already has a fan in Vikings legend John Randle. Meeting Randle in person, he said, was a humbling experience.

“Being in the presence of him and I’ve told him this as well, it’s just an honor to have him be excited about me and being willing to talk to me so those opportunities you can’t take for granted so for me just hopefully I just get to experience all that and use it to my advantage,” Lynch said.

The Vikings are getting a player that knows what it takes to build a winner. At Baylor, Lynch won just one game his freshman year, but two years later, the Bears played Georgia in the Sugar Bowl.

Winning didn’t come easy at Baylor and winning won’t come easy in the NFL, but if not for that one-win first season, Lynch says he wouldn’t be the player he is today.

“It was Coach Rhule’s first year, so practices are really tough and we keep losing and we’re kind of just wondering why we keep doing this and if you only win, you never kind of experience how that works and I feel like that’s what helped us this year. Whenever we lost to Oklahoma that first time, we knew exactly what we had to do to bounce back and there was no questioning of what we needed to do. We learned how to bounce back from a loss and find a way to get a win.”