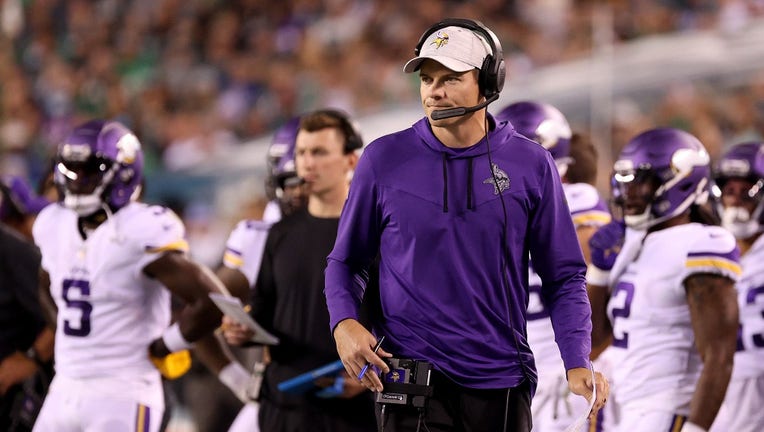 Head coach Kevin O'Connell of the Minnesota Vikings looks on during the second quarter against the Philadelphia Eagles at Lincoln Financial Field on September 19, 2022 in Philadelphia, Pennsylvania.  ((Photo by Tim Nwachukwu/Getty Images))

MINNEAPOLIS - The Minnesota Vikings were riding an emotional high after starting the Kevin O’Connell era with a 23-7 win over the Green Bay Packers at U.S. Bank Stadium on Sept. 11.

Eight days later, it all came crashing down and they got a harsh dose of reality. The Vikings’ defense had no answers for Philadelphia Eagles’ quarterback Jalen Hurts, and Kirk Cousins threw three second half interceptions in a 24-7 loss at Lincoln Financial Field on Monday Night Football. The Vikings fall to 1-1 and head home on a short week, having to host the 1-1 Detroit Lions on Sunday.

Hurts accounted for 301 of his 390 total yards in the first half, and all three of the Eagles’ touchdowns. He scored from three yards out on the opening drive to give Philadelphia a 7-0 lead. He then hit a wide open Quez Watkins for a 53-yard touchdown as the Vikings’ secondary had a busted coverage on the first play of the second quarter.

The Eagles had a 14-0 lead before the Vikings were able to get a first down.

"Ultimately, I think this one is on me. I don’t think I did enough, ultimately I have to put us in better positions. I told our team that I'm going to work like crazy to make sure that this does not happen again," O'Connell said after the loss. "A bad taste in your mouth is one thing, but we know what our standard is and it starts with me. I’ve got to make sure I do much, much more to help our guys play to their standard."

Hurts finished a dazzling first half with a 26-yard touchdown run, only having to fight for the last three yards with much of the Vikings’ defense running backwards on the play. The Eagles out-gained the Vikings 347-93 in the first half.

The Vikings had four trips inside the Philadelphia 30-yard line in the second half, and generated zero points. Three of the drives ended with Cousins being intercepted, two of those by Darius Slay, and the last ended with Cousins getting sacked to finish the game. Cousins' second interception came after Patrick Peterson blocked a field goal to prevent the Eagles from extending their lead. His final interception was a back-breaker, after a Jordan Hicks interception gave the Vikings the ball at the Philadelphia 9-yard line. It was an easy interception for Slay on an underthrown ball intended for Justin Jefferson.

Cousins finished 27-of-46 passing for 221 yards, an early touchdown to Irv Smith Jr. and three turnovers. He was also sacked twice.

"Disappointing performance. We need to play better and we will play better up ahead," Cousins said.

After nine catches for 184 yards and two scores against the Packers, Jefferson had just six catches for 48 yards Monday night. Adam Thielen had four catches for 52 yards, but didn’t get his first catch until the fourth quarter. Smith Jr. had five catches for 36 yards and a score, but also had a key drop in the first half on a deep pass that might have gone for a touchdown.

Last week, DeAndre Swift ran for 144 yards and a touchdown on the Eagles. Monday night, Dalvin Cook had just six carries for 17 yards. The Vikings' leading rusher? Cousins, with two scrambles for 20 yards. The Vikings ran for only 62 yards on the night, getting in an early hole.

The Vikings were out-gained 486-264 in the loss, and were just 4-of-12 on third down. Hurts finished 26-of-31 passing for 333 yards, three total touchdowns and did whatever he wanted against Minnesota’s defense.

Simply put, everything that could go wrong for the Vikings Monday night did in their first loss of the season. We'll see how O'Connell and the team responds to their first true adversity of the 2022 season.

"It’s going to be a challenge. We’ll get right back to work as a staff. We’ve got a plan for those guys knowing this is our first short week, leading into a tough divisional game at home. We’re going to rally and fully expect to be at our best on Sunday at U.S. Bank Stadium," O'Connell said.