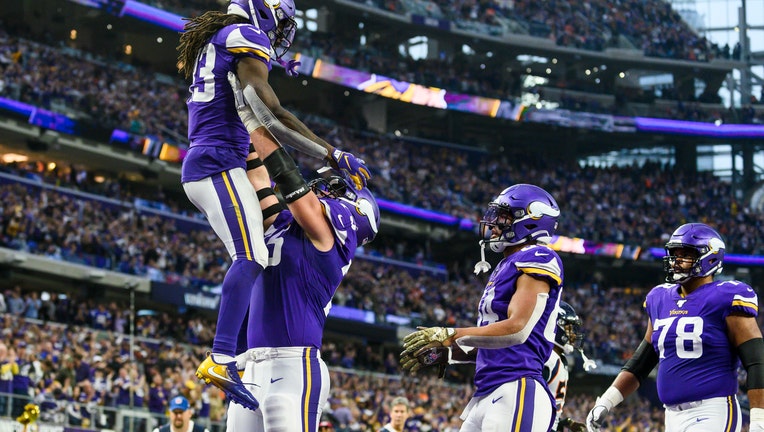 Dalvin Cook #33 of the Minnesota Vikings celebrates after scoring a touchdown in the fourth quarter of the game against the Denver Broncos at U.S. Bank Stadium on November 17, 2019 in Minneapolis, Minnesota. (Stephen Maturen / Getty Images)

MINNEAPOLIS - The Minnesota Vikings will open the 2020 regular season at home and against one of their biggest rivals, and there’s a good chance no fans will be in attendance to see it live.

The Vikings and every other NFL team released their regular season schedule Thursday night. The Vikings will host the Green Bay Packers in Week 1 at U.S. Bank Stadium, scheduled for now for Sept. 13. If the NFL intends to start its regular season in September, indications are it will have to be without fans due to the Coronavirus pandemic.

It’s the first time in franchise history the Vikings will have hosted the Packers in Week 1. The Vikings have had their season-opener six times at Lambeau Field, most recently in 2008. It’s also the earliest the Packers will have come to Minneapolis since 2016, which was Week 2 in the first game at U.S. Bank Stadium.

The Vikings travel to face Philip Rivers and the Indianapolis Colts in Week 2, return home to face the Tennessee Titans in Week 3 and then go back on the road Week 4 to face the Houston Texans. The first four games are all noon kickoffs.

The Vikings will also play on a Friday for just the fourth time in franchise history. They will be in New Orleans facing the Saints on Christmas Day.

Minnesota will visit Tom Brady, and former Gophers stars Antoine Winfield Jr. and Tyler Johnson in Tampa Bay on Dec. 13. That's after three straight home games against the Cowboys, Panthers and Jaguars. Minnesota's bye is in Week 7. The Vikings finish the regular season on the road at Detroit on Jan. 3.

The road tests will be the Bears, Lions, Packers, Texans, Colts, Saints, Buccaneers and Seahawks.