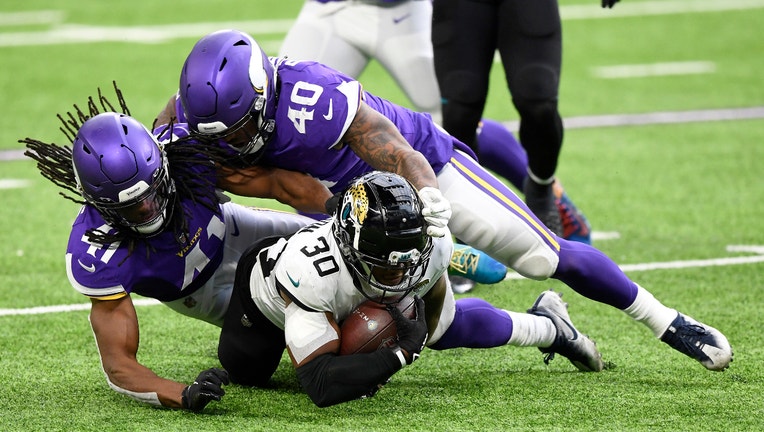 James Robinson #30 of the Jacksonville Jaguars is tackled by Anthony Harris #41 and Todd Davis #40 of the Minnesota Vikings in the second quarter at U.S. Bank Stadium on December 06, 2020 in Minneapolis, Minnesota. ((Photo by Hannah Foslien/Getty Images))

MINNEAPOLIS - Veteran safety Anthony Harris spoke candidly with reporters on Tuesday and admitted his future with the Minnesota Vikings, just like it was last offseason, is uncertain.

Harris was a free agent last offseason and the subject of trade rumors as the Vikings tried to navigate his contract and a tight salary cap. Coming off a season where he made 60 tackles, tied for the NFL lead with six interceptions and had a defensive touchdown, Harris returned to the Vikings in 2020 on the franchise tag at $11.4 million.

Harris will become a free agent in March, and is in a different spot now than we was this time last year. He finished third on the defense with 104 tackles, but didn’t have a single interception.

He admitted he doesn’t know what his future holds, but is going to let his representation handle it.

"I think after going through it and being in this position, it’s one of those things where you don’t try to worry about anything that’s going on," Harris said. The season just ended, you want to take some time off, allow your body, allow your mind to kind of relax. Then just let my agents and everyone else handle the things they need to handle."

Harris added, "I’ve been here my entire career. It’s been great, from everything down to the locker room to executives to coaches to the city itself and how it’s treated my family and myself. It definitely holds a special place with me."

"We talked a ton over all the years but this time of year, contracts and all that stuff, you don’t know how it’s going to shake out," Smith said. "No matter what, you always want to play with a guy like Anthony and you always want to see him have success. We’ve helped each other on the field, off the field, we’ve had some good years together and definitely want to see success moving forward for him."

Harris was one of the few Vikings’ veterans that played all 1,074 defensive snaps this season. A combination of six starters leaving in the offseason and several injuries to key players led to the Vikings struggling on defense in 2020.

He was the top safety in the NFL in 2019, according to Pro Football Focus. This season, he fell to No. 37. The Vikings’ defense as a whole finished 27th in total defense, 29th in scoring defense, 27th in rushing yards allowed and 25th in passing yards.

Mike Zimmer prides himself in having one of the top defenses in the NFL every year. The hope is they can get back to that standard in 2021, and Harris will be part of it if the price is right.

"Coach Zim is a prideful guy in terms of the standard that he sets and I think the players carry a bit of that as well in terms of what our standard looks like here in Minnesota, what we’re used to in terms of going out and performing at a high level," Harris said. "Eager to get back to work, take the experience that everyone has gotten this season, implement that experience in terms of trying to move forward, trying to reunite things and bring back that standard of high performance and high excellence that expectations have."