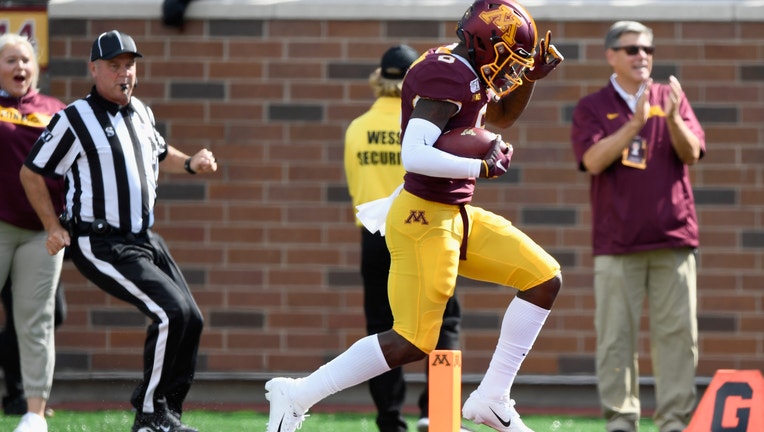 MINNEAPOLIS, MINNESOTA - SEPTEMBER 14: Tyler Johnson #6 of the Minnesota Gophers celebrates as he carries the ball for a touchdown against the Georgia Southern Eagles during the first quarter of the game at TCF Bank Stadium on September 14, 2019 in M

MINNEAPOLIS (FOX 9) - A late-game turnover and touchdown forced the Gophers offense to go on a last-second drive to get a comeback win and improve to 3-0 on the season.

The Gophers were working to drive in the fourth when Eagles linebacker Rashad Byrd knocked the ball loose from Gophers quarterback Tanner Morgan's hands as he was dropping back for a pass. Byrd then scooped up the fumble, taking it in for a score.

The touchdown erased the Gophers small lead, putting Georgia Southern up 32-28 after a failed two-point attempt.

With the ball back in their hands, the Gophers quickly moved up the field with Morgan putting together a strong drive, ending with a touchdown catch by senior Tyler Johnson -- his third score of the day. Johnson caught the ball despite being draped by a defender -- who was flagged for a penalty. 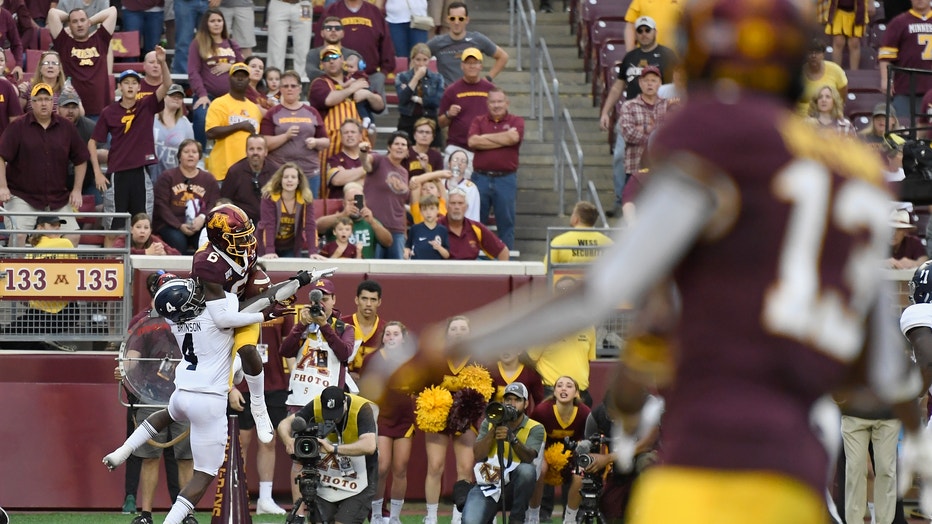 Tyler Johnson #6 of the Minnesota Gophers catches the ball against Monquavion Brinson #4 of the Georgia Southern Eagles for a touchdown during the fourth quarter of the game at TCF Bank Stadium on September 14, 2019 in Minneapolis, Minnesota. The Gop

The touchdown was part of a huge performance by Johnson on the day. After a slow start to the season, with seven catches and 99 yards over the first two games, Johnson went off Saturday for 10 catches, 140 yards and three touchdowns.

Johnson started the day snagging in a 73-yard touchdowns pass. He followed up minutes later grabbing seven-yard toss on third down.

But the Eagles didn't make it easy for Minnesota. Near the end of the first half, Georgia Southern stopped Minnesota on 4th and 1 to take possession at the Minnesota 34-yard line.

The Eagles then pounded the rock into the endzone, with running back Justin Tomlin breaking a 12-yard run to score, putting the score 21-20 Gophers at half-time.

After a scoreless third quarter, the Eagles answered an early fourth-quarter touchdown by the Gophers with a score of their own, setting up for the dramatic finish.