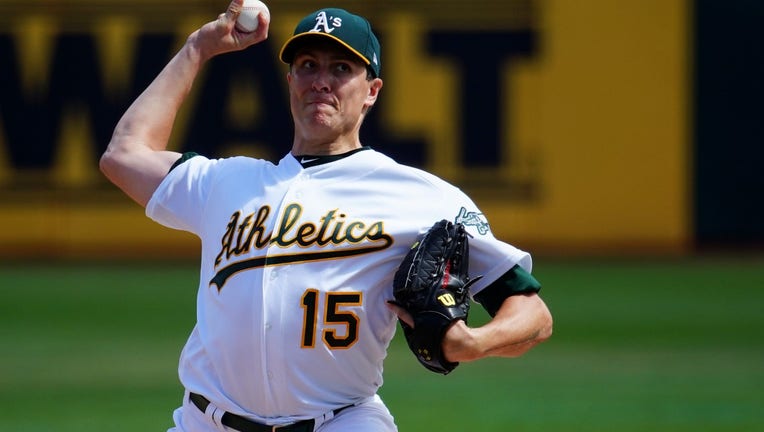 Homer Bailey #15 of the Oakland Athletics pitches during the first inning against the Kansas City Royals at Ring Central Coliseum on September 18, 2019 in Oakland, California. ( (Photo by Daniel Shirey/Getty Images) )

MINNEAPOLIS (FOX 9) - The Minnesota Twins didn’t get the coveted free agent pitchers fans wanted to add to their starting rotation, but they did sign a pair of pitchers on Tuesday that should contribute for the 2020 season.

The Twins announced they’ve signed Homer Bailey and Rich Hill to contracts for the upcoming season. Bailey made 31 starts last season, splitting time with the Kansas City Royals and Oakland Athletics. He finished 13-9 with a 4.57 earned run average and 149 strikeouts in 163.1 innings.

Bailey, who will turn 34 in May, had his first full season since 2013. He allowed just nine home runs and 15 walks in 13 starts with the Athletics last season, finishing 6-3.

Rich Hill made 13 starts with the L.A. Dodgers last season, finishing 4-1 with a 2.45 ERA and 72 strikeouts in 58 2/3 innings. He’ll turn 40 in March and underwent a modified Tommy John surgery earlier this year.

The Twins were in dire need of adding starting pitching after missing out on free agents Zach Wheeler and Madison Bumgarner. They reportedly offered contracts to both, and they chose other teams.

The Twins also brought back starters Jake Odorizzi and Michael Pineda, but Pineda will miss the first 39 games of the season after being suspended near the end of last year. He tested positive for banned substance, a diuretic used to manage weight and high blood pressure. The Twins also lost starter Kyle Gibson to the Texas Rangers in free agency.

The Twins may not be done signing players, either. Several reports indicate they are still in on free agent third baseman and slugger Josh Donaldson.

Both Hill and Bailey are joining the Twins on one-year contracts.