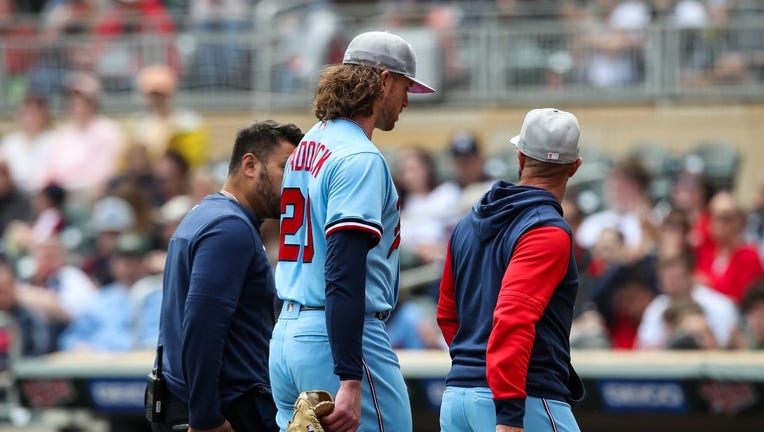 Pitcher Chris Paddack #20 of the Minnesota Twins leaves the game with a medical trainer in the third inning against the Oakland Athletics at Target Field on May 8, 2022 in Minneapolis, Minnesota. Teams across the league are wearing pink today in hono ((Photo by David Berding/Getty Images))

MINNEAPOLIS - The Minnesota Twins acquired Chris Paddack for depth in the starting rotation a day before opening the regular season, but his 2022 season is over after just five starts.

Paddack, pulled from his last start after inflammation in his throwing elbow, underwent Tommy John surgery on Wednesday. His 2022 season is over after having the same procedure done in 2016, just a year after being drafted. The Twins traded star reliever Taylor Rogers to the San Diego Padres to get Paddack, needing starting pitching with Kenta Maeda out for the season, and Jose Berrios traded last summer.

In five starts, Paddack went 1-2 with a 4.03 earned run average. He had 20 strikeouts and walked just two batters, but his season only lasted 22 1/3 innings.

Twins manager Rocco Baldelli said Wednesday, after the Twins beat the Oakland Athletics 14-4 to get a series win, Paddack’s surgery went smoothly and according to plan.

"He's an ultra-talented young guy with a great work ethic, and I think he has an incredibly bright future with us. But the only way to get there is for him to take care of business right now and get this done," Baldelli said.

Paddack had been healthy by most accounts leading up to joining the Twins. He made 22 starts and pitched 108 innings last season. In the 2020 season shortened by COVID-19 and tense labor negotiations, Paddack made 12 starts and tossed 59 innings. He was 9-7 in 2019 over 26 starts, and threw 140 2/3 innings.

If the Twins become a playoff team later this summer, they’ll have to move forward without Paddack.

"It's always disappointing when you're going to miss time. Chris has battled through some things in his career, and his health, but he has to get himself strong and right," Baldelli said. "We need the best possible version of him, and the best possible version of Chris Paddack is to get himself healthy and to have this procedure and rehab himself and get back to full strength."

The Twins are 22016 and lead the American League Central Division by 3.5 games. They continue a six-game road trip at the Kansas City Royals this weekend before coming back to Target Field for a seven-game home stand next week.