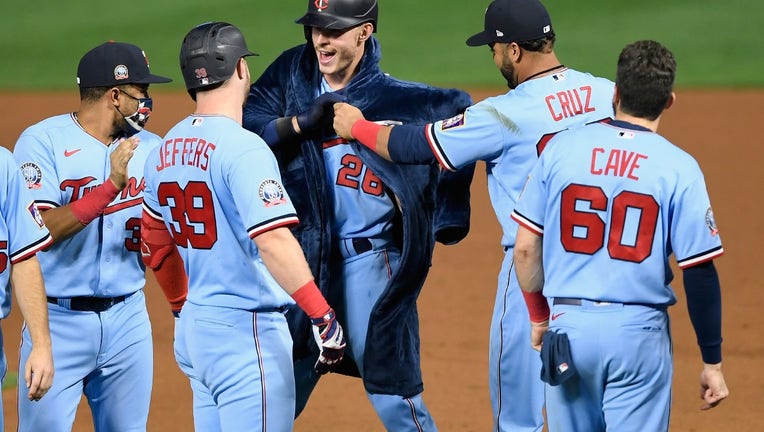 Nelson Cruz #23 of the Minnesota Twins helps teammate Max Kepler #26 into his personalized robe after Kepler hit a walk-off single against the Detroit Tigers during the tenth inning of the game at Target Field on September 22, 2020 in Minneapolis, Mi ((Photo by Hannah Foslien/Getty Images))

MINNEAPOLIS - The Minnesota Twins celebrated a 5-4 walk-off victory over the Detroit Tigers Tuesday night after Max Kepler delivered a game-winning bloop hit to left field in the bottom of the 10th inning.

They did so with… bath robes? You read that right. Slugger and third baseman Josh Donaldson invested in personalized bath robes this week for every player. Many of them were spotted wearing them in the dugout Tuesday night, and Nelson Cruz put his on teammates after home runs and other plays worth celebrating.

The Twins are about to enter quarantine as they get closer to the American League playoffs due to the COVID-19 pandemic, so they might as well do it in style. It’s another way to build some team chemistry as the shortened regular season comes to a close and they start their pursuit of trying to get to the World Series.

Most importantly, Tuesday night’s win got them square in the rear-view mirrors of the Chicago White Sox. The race for the American League Central Division is far from over, and the Twins have four games left. After Tuesday’s win and the White Sox loss, the Twins are just a half game out of first place.

The White Sox have two more games against the Cleveland Indians, then finish the season against the Chicago Cubs. Winning the AL Central is and should still be the objective for the Twins. A division title would be their second straight under Rocco Baldelli, and it would earn them a top-four seed and home field for the Wild Card series. Maybe most importantly for fans, they would also avoid having the New York Yankees come to town.

If the Twins don’t win the AL Central, they’re most likely to earn the No. 4 seed. The Yankees are currently the No. 5 seed, and the history there doesn’t favor Minnesota, even if the series is at Target Field. The Twins haven’t won a playoff game since 2004, a playoff series since 2002 and have lost 14 of their last 16 playoff games against the Yankees dating back to 2003.