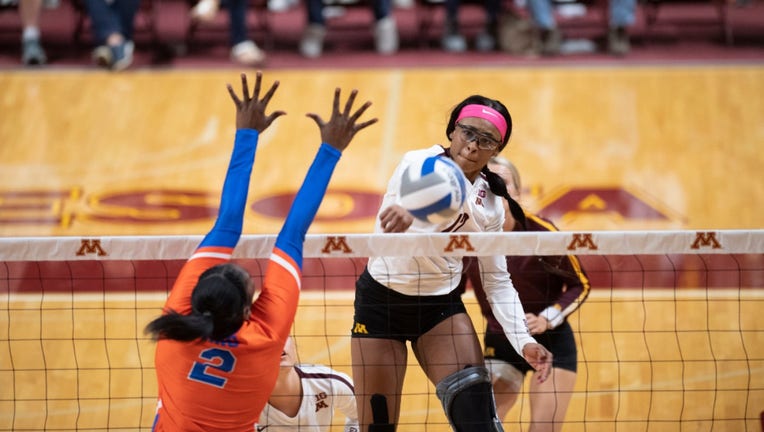 Expectations for the program were high, as they always are. The hopes were even higher, with Minneapolis being the host site for the Final Four. The top tournament in college volleyball was in the Gophers’ backyard, the only problem? They weren’t involved after being eliminated by Oregon in the Sweet 16. So does Minnesota face less pressure this year, with the Final Four in Pittsburgh? McCutcheon is taking this year’s NCAA Tournament match by match, point by point. That starts with Fairfield Friday night at Maturi Pavilion.

“I guess but what are we defining pressure as? I mean it’s an expectation or an external thing. Probably the one thing I could say is that was really hard to get away from it last year,” McCutcheon said. “For us, obviously we try to play it match to match, point to point. It was what it was. This year is different for a variety of reasons, but mainly because of the team and the stuff that they’ve gone through already to get to where we are.”

The Gophers (23-5) earned the No. 7 overall seed and host a regional this weekend at Maturi Pavilion that includes Fairfield, Iowa State and Creighton. The team to come out of the regional Saturday night likely heads to No. 2-seeded Texas.

Minnesota faces Fairfield in the nightcap Friday, while Iowa State and Creighton meet in the early match. The Gophers couldn’t be more prepared for the NCAA Tournament. They’re one of seven Big Ten teams to make the tournament, one of five seeded teams from the league and their schedule also included Florida State, No. 10-seeded Florida and No. 3-seeded Stanford.

The Gophers have been tested in the Big Ten, and they’re ready for the playoff intensity.

“I think it definitely prepares us because every night, it’s always a challenge whoever we face. I think it just prepares us for whatever is to come in the tournament,” junior hitter Stephanie Samedy said.

Minnesota enters the NCAA Tournament having won four of its last five matches, and three straight while only dropping one set in the process. When McCutcheon was asked about his team on Tuesday, the word “authentic” came to mind.

They’ve had to overcome injuries, players switching positions and some even sacrificing playing time for the greater good: Winning.

“They are what they are, and that’s great. Good people, good students and good volleyball players, and they’re doing it all for the right reasons. I think when you get to this phase of the season, that matters a lot,” McCutcheon said.

The Gophers’ Friday opponent, Fairfield, is making its 11th trip to the NCAA Tournament and fourth in five years after finishing 24-5, including a 17-1 mark in the MAAC.

“They’re a good team, they’re scrappy, they’re going to play hard. In this tournament, everyone is fighting for their lives so we expect a good match,” McCutcheon said.

Samedy said nothing changes this week as the Gophers prepare for the “win or go home” scenario. They’ve faced enough tough competition throughout the season that they’re ready for anything thrown at them. They’ve seen film on Fairfield, but never faced them before. It’s about trusting what they’ve done to get this far.

“Trusting that we’re all in it together, kind of having a team-first mentality,” Samedy said.