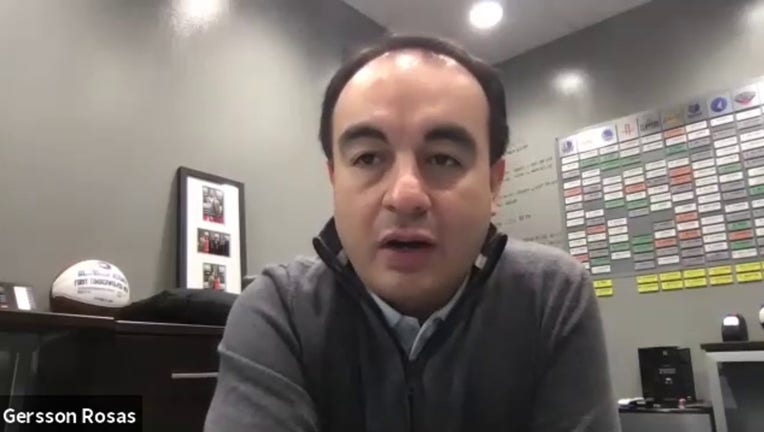 Minnesota Timberwolves front office head Gersson Rosas spoke with reporters Monday morning ahead of Wednesday night's NBA Draft. The Wolves have the No. 1, 17 and 33 picks.

MINNEAPOLIS - The NBA Draft is about 48 hours away, and the Minnesota Timberwolves are working around the clock as they get ready for one of the most important nights in the history of the franchise.

After finishing 19-45 in a season shortened due to the COVID-19 pandemic, the Wolves have used the last several months to shape the future of their franchise. We may or may not have that answer Wednesday night, when the Wolves are on the clock with the No. 1 pick after winning the NBA Draft Lottery.

The Wolves feel they’re in a good spot with the No. 1, 17 and 33 picks in the draft. But as front office head Gersson Rosas said Monday morning, “the lines of communication are open.” Without a clear cut generational talent at the top, the phones are ringing at Mayo Clinic Square to see if the right partner exists to execute a trade.

The main goal has never changed: Add a third piece to team up with Karl-Anthony Towns and D’Angelo Russell. Towns was the top pick the last time the Wolves won the draft lottery, and Russell was the centerpiece of the roster shakeup done by Rosas before last season's NBA trade deadline.

How the Wolves get that third piece, we’ll find out Wednesday night. The consensus top three players to choose from at No. 1 are Georgia guard Anthony Edwards, guard LaMelo Ball and Memphis center James Wiseman.

All three present challenges to the existing roster. The Wolves already feature several players similar to Edwards. Drafting Ball would allow Russell to shift over to his more natural shooting guard spot, but the Ball family is known for its drama, and he’s a player that demands the ball. Wiseman would allow Towns to shift to a more natural fit at power forward, but there’s already been multiple reports that Wiseman doesn’t want to come to Minnesota.

So will the Wolves make a pick at No. 1, or trade it? We’ll find out soon enough.

Speaking from his Mayo Clinic Square Office on Monday, Rosas said the Wolves have their draft board locked for all three of their selections. How the actual board falls, and if they find an appropriate trade partner for the No. 1 pick, is another story.

Rosas has been the front office head for the Wolves for about 18 months. It’s his job to find the right talent with all three picks, and turn Minnesota into a contender again. Fans are hungry for a winner, and it’s a franchise that’s had one playoff appearance since Kevin Garnet led them to the 2004 Western Conference Finals.

“We’re doing the things that are the right things to do for this organization. We don’t want to be short-sighted for the public perception of making the choice that will help us in Day 1. We want to make the decision that’s going to help us in Day 400. The draft is one part of that process,” Rosas said.