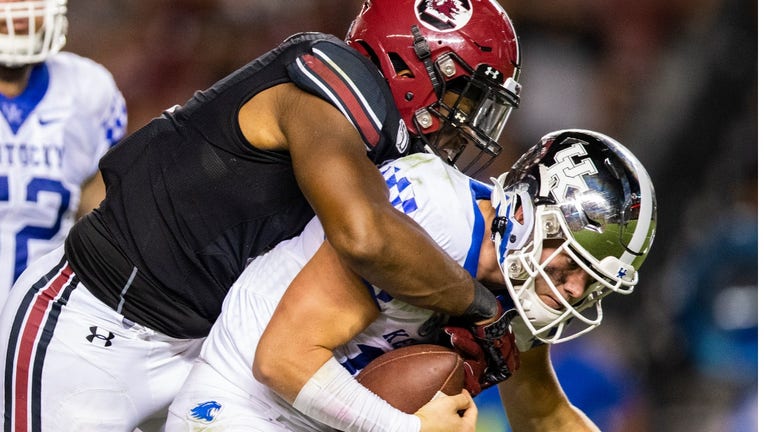 D.J. Wonnum #8 of the South Carolina Gamecocks sacks Sawyer Smith #12 of the Kentucky Wildcats during the second half of a game at Williams-Brice Stadium on September 28, 2019 in Columbia, South Carolina. ((Photo by Carmen Mandato/Getty Images))

When the Vikings started Day 3 of the NFL Draft and Wonnum was available with the No. 117 overall pick, he was the guy. With Everson Griffen, Linval Joseph and Stephen Weatherly departed from the defensive line, Wonnum could get an early opportunity to make an immediate impact.

“I think the way the fourth round fell to us, to get those players where we got them, D.J., the South Carolina defensive end fit us from an athletic trait standpoint,” Spielman said. "That was one of Andre Patterson's guys that he really he wanted to get his hands on and work with.”

Vikings GM Spielman on draft: We got a bunch of guys ‘who love to play the game’

It was a busy draft weekend for Vikings general manager Rick Spielman.

Wonnum’s relationship with Patterson, the defensive line coach and now co-defensive coordinator, started at the NFL Combine. Wonnum had an eye on the Vikings and thought they might pick him on the final day of the NFL Draft.

“I know they were really interested in me. Me and coach Patterson talked a lot at the Combine, and he told me he saw a lot of things in me,” Wonnum said.

What Patterson probably saw is Wonnum’s potential to be another star for the Vikings at defensive end. He couldn’t be more excited to learn from Patterson and Hunter, who had 14.5 sacks for the Vikings last year and became the fastest player in NFL history to 50 career sacks in his first five seasons.

Wonnum was slowed by an ankle injury his junior season that forced him to miss eight games. But he bounced back in a big way last year, with 37 tackles, 9.5 for a loss, 4.5 sacks, one interception and a blocked kick. Three of those sacks came in one game against Kentucky.

Wonnum is well aware of the impact Hunter has already made with the Vikings.

“He’s a dawg man. Coach Patterson saw something in me similar to what he saw in Danielle Hunter and I’m just excited to be able to learn from one of the best pass rushers in the league right now,” Wonnum said.

Wonnum’s leadership and character showed up early at South Carolina. He was named a team captain as just a sophomore. Being a good teammate, a good person in the community and giving back is just as important to him as sacking the quarterback or getting tackles for loss.

“Treating everybody, the janitor like you treat the mayor with the same respect off the field and coming in with the everyday mindset to get better,” Wonnum said.

Spielman and some staffers made a pre-draft trip to South Carolina to visit with Gamecocks head coach Will Muschamp. It was in that meeting Spielman learned what type of guy Wonnum is away from football.

“They just raved about the kid as a person,” said Jamaal Stephenson, the Vikings director of college scouting. “He’s long, he’s athletic, he’s very coachable. He’s a good kid off the field, so he fits the Viking mold for sure.”

If he can become the next dominant defensive line force like Hunter, even better.

“It kind of like opened my eyes, like man I’m going to be a beast in the league. Just by him comparing me, it’s exciting,” Wonnum said.