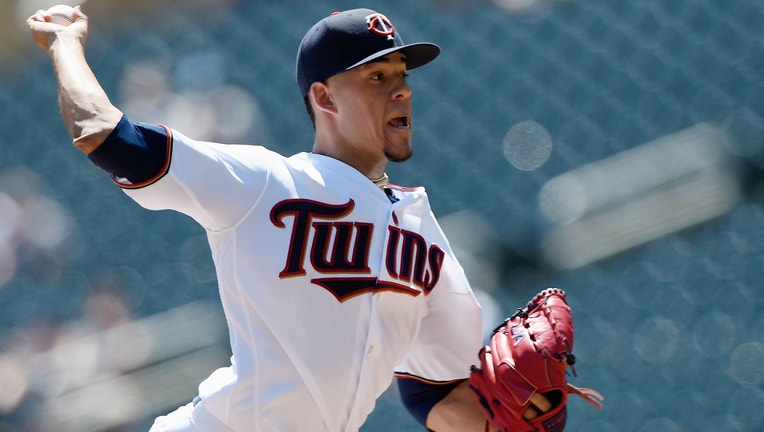 MINNEAPOLIS - The Minnesota Twins are reporting for summer camp this week, with their first workouts scheduled for Friday at Target Field in Minneapolis and CHS Field in St. Paul.

It’s imperative in a 60-game season that the Twins get off to a fast start, if they have intentions of defending their first American League Central Division title since 2010. That starts with starting pitching. The Twins have Jose Berrios and Jake Odorizzi in the top two spots, then filling out the rotation becomes a little more uncertain.

President of Baseball Operations Derek Falvey and Manager Rocco Baldelli haven’t ruled out using a six or seven-man rotation, with the anticipation of 60 games over a 66-day stretch to determine the 10 playoff teams. So what do the Twins have? Here is a look. It gets more complicated when you factor in that Michael Pineda is suspended for the first 39 games, finishing a 60-game suspension dating back to last season.

Jose Berrios is the ace, we know that much. He’ll get the ball on Opening Day, regardless of whether it’s at Target Field or on the road. He’s had his ups and downs, but Berrios was 14-8 last season in 32 starts, second for the Twins in wins, with a 3.68 earned run average. He struck out 195 and walked 51 in 200.1 innings. He can locate his fastball, and his breaking pitches keep hitters off balance. The Twins have a good chance to win every time he takes the mound, it’s that simple.

Jake Odorizzi opted to return to the Twins instead of pursuing free agency after leading the Twins with 15 wins last season. Odorizzi finished 15-7 in 30 starts with a 3.51 earned run average. He had 178 strikeouts and 53 walks in 159 innings. Opposing batters hit just .234 against him last season. If he can be consistent and keep the ball in the park, Odorizzi is a solid No. 2 option for the Twins.

Kenta Maeda is the likely No. 3 starter in the rotation as the Twins enter summer training this week. The Twins acquired Maeda from the L.A. Dodgers in the off-season. Maeda was 10-8 last season in 26 starts with a 4.04 ERA. He became a bullpen option late last season and earned three saves. Maeda had 169 strikeouts and 51 walks in 153.2 innings. He allowed 22 home runs last season, so keeping the ball in the park will be imperative, but he’s the most likely to replace Kyle  Gibson in the rotation.

In a sense, the Covid-19 pandemic might have been the best thing to happen to Rich Hill. The left-hander had off-season elbow surgery and wouldn’t have been ready to return by the traditional Opening Day in April. Thanks to a three-month delay, Hill should be in the hunt to compete for a spot in the starting rotation as camp starts. He was 4-1 with a 2.45 ERA in 13 starts last season, finishing with 72 strikeouts in 58.2 innings. He’s got 65 career wins and should be healthy from Day 1. With a 3.82 career ERA, he should add value to the Twins’ rotation.

Between the Royals and Athletics last season, Homer Bailey went 13-9 in 31 starts with a 4.57 ERA. He had 149 strikeouts in 163.1 innings. He’s got 80 career wins, and 1,150 career strikeouts. Bailey should give the Twins some much-needed depth and experience at the back end of the rotation as he enters his 14th MLB season.

Michael Pineda was the surprise of the rotation last year, going 11-5 in 26 starts with a 4.01 ERA. He had 140 strikeouts and just 28 walks in 146 innings before his suspension for testing positive for a banned substance, a diuretic he used to manage weight and blood pressure. He must serve the remaining 39 games, but will train with the Twins and will rejoin the rotation sometime in September.

What are the other options if a starter gets hurt or the Twins need a spot start? Pitchers on the current 40-man roster with starting experience include Trevor May, Devin Smeltzer, Lewis Thorpe and Tyler Duffey. In the event of an "opener" for a bullpen game, the Twins could go to Randy Dobnak or Cody Stashak.

With a shortened season and a sense of urgency to start fast, it’s imperative the starting rotation gets off to a good start.