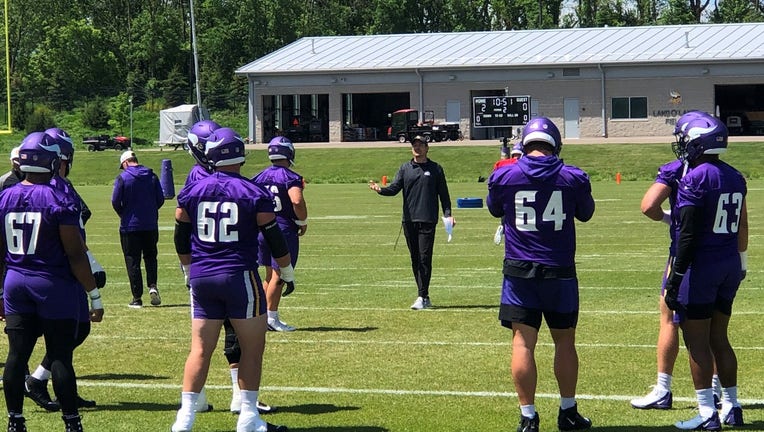 Kevin O'Connell works with the offensive line as the Minnesota Vikings are in Week 3 of organized team activities at TCO Performance Center.

MINNEAPOLIS - Kevin O’Connell was one of the most active people on the field Wednesday at TCO Performance Center in Eagan as the Minnesota Vikings held their third and final session of organized team activities open to reporters.

Throughout offseason workouts, O’Connell has made a point to run across the practice fields and be involved in defensive and offensive sessions. He wants to be able to relate to all his players, regardless of position.

The Minnesota Vikings continue their offseason OTAs with a new addition at the wide receiver position.

The Vikings wrap up OTAs at the end of this week, then have three days of mandatory minicamp next week before departing for a summer break. Then, it gets real with the start of training camp in late July.

The vibe feels different with a new coaching staff, but how will that actually translate on the field when games start in September? The short answer is we won’t know until the Vikings host the Packers Week 1. Until then, here are some takeaways from OTAs as the Vikings transition to minicamp.

WHO WILL WIN THE STARTING JOB AT RIGHT GUARD?

Based on player rotations during team sessions at OTAs, it appears there’s one starting spot open on the offensive line heading into training camp. Christian Darrisaw (left guard), Ezra Cleveland (left tackle), Garrett Bradbury (center) and Brian O’Neill (right tackle) look to be locked in as starters. That leaves an opening at right guard, and right now it appears to be a competition between Jesse Davis and Chris Reed. Both have gotten first-team reps throughout OTAs. And don’t forget about rookie Ed Ingram, a second round pick out of LSU.

INJURIES STARTING TO PILE UP?

Ihmir Smith-Marsette watched Wednesday’s practice with a walking boot on his right leg, and moving around on a scooter. O’Connell said his spring is over, but he’s expected to be back ready for training camp. KJ Osborn also didn’t practice Wednesday with what’s being called a minor, undisclosed injury. Za’Darius Smith sat out as well, but should be back for minicamp.

Injuries will be something to monitor going forward, especially with Smith and Danielle Hunter coming back healthy.

With Smith-Marsette and Osborn unavailable, the Vikings brought in veteran Albert Wilson. O’Connell said it’s unrelated, and they wanted to add a veteran receiver to the team. Adam Thielen had the highlight play Wednesday, with a one-handed grab for a touchdown from Kirk Cousins. O’Connell knows what he has in Justin Jefferson, and Bisi Johnson has looked good early coming off a torn ACL last season. Osborn, when healthy, is also an impact player. Wilson, who has 13 career touchdowns in seven seasons, will provide depth.

WHO WINS THE BACK-UP QUARTERBACK JOB?

It became very clear what Mike Zimmer thought of Kellen Mond when he didn’t play the rookie last year at Green Bay after Cousins went down with COVID-19. With O’Connell and a new coaching staff in place, it gives Mond new life to be the back-up to Cousins. Sean Mannion is still largely getting the second-team reps at workouts.

The Vikings have three workouts next week, then get a summer break before starting training camp.