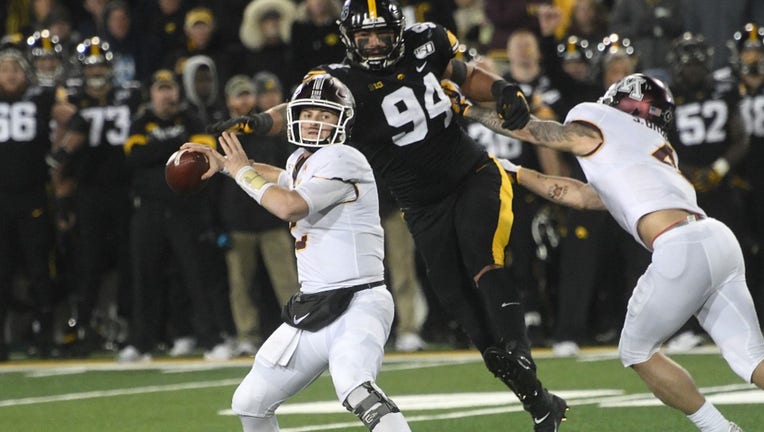 MINNEAPOLIS - The dream of an undefeated regular season came to an end for the University of Minnesota football team in a 23-19 loss at Iowa on Saturday.

The Gophers dropped to 9-1 on the season, including 6-1 in Big Ten play. For the fifth straight season, Floyd of Rosedale is staying in Iowa City. Despite a valiant comeback effort from the Gophers, they weren’t able to snap a losing streak at Kinnick Stadium that goes back 20 years, to 1999.

But the reality remains that the Gophers control their own destiny with two games to play. They travel to Northwestern and host Wisconsin, likely needing to win both to reach the Big Ten title game. Here are takeaways from Saturday’s loss.

Tanner Morgan continues to be one of the most efficient quarterbacks in the country, and he nearly led the Gophers to a historic comeback win in Iowa City on Saturday. He finished 25-of-36 for 368 yards and one touchdown to Tyler Johnson. That’s despite being sacked six times, including two straight that forced him to leave the game injured on the final drive.

He hit Johnson and Rashod Bateman for a combined 15 catches and 268 yards. Morgan has completed 68 percent of his passes for 2,468 yards and 22 touchdowns with just four interceptions. Dating back to last season, Morgan is 13-3 as the Gophers’ starter. He was largely the reason Minnesota got back in the game and had a chance to win at the end.

PJ Fleck is keeping an eye on his redshirt sophomore this week, and either Jacob Clark or Cole Kramer would get the start at Northwestern if Morgan can’t play. Kramer finished the game Saturday at Iowa 0-for-2, including the game-sealing interception on a deep throw down the sideline.

Gophers’ senior linebacker Thomas Barber had a puzzling quote when describing his team’s defense in the first half of Saturday’s loss.

“Just not us, not being prepared mentally. We just weren’t mentally prepared and they just came and hit us in the mouth,” he said.

Not prepared mentally to face a ranked rival on the road, with a chance to get one game closer to clinching the Big Ten West title. That’s interesting and baffling at the same time. He’s not wrong. The Hawkeyes had more energy and fire early, scoring on each of their first three possessions to race out to an early 20-3 lead.

One play epitomized the first half. On Iowa’s first third down, Tyler Goodson took a pitch left untouched for a 26-yard gain and a first down. Nate Stanley threw for 108 yards and two scores in the first half, and had the Gophers’ defense on their heels for a majority of the start.

The Gophers responded in the second half, allowing just three points and 69 total yards. But the damage was done early, and Minnesota could never fully recover.

PJ Fleck faced some interesting decisions in the loss with a freshman kicker and his timeout taking. With Michael Lantz not making the trip, he put Brock Walker out for a try from 50 yards out in the first quarter at Kinnick Stadium. Fleck said it’s the edge of his range, and the wind was at his back. The kick went low and left. Walker made a short field goal to end the first half, after it caromed off the right post. He also missed an extra point in the fourth quarter that made it 23-19, when it could’ve been a 3-poin game.

Fleck used a timeout before the kick at the end of the first half, when many thought he would go for a touchdown from the 4-yard line. He also opted to use a timeout in the fourth quarter, instead of taking a delay of game penalty, on a drive the Gophers finished with a touchdown. Taking the timeout forced an onside kick with 3:27 left in regulation, which Iowa recovered.

The biggest play of the game might have been an incomplete pass, and it’s one Tyler Johnson wishes he could have back on an otherwise huge night for the senior. Johnson finished with nine catches for 170 yards and a touchdown. The score to open the third quarter started the Gophers’ comeback.

Johnson spent most of the night making circus catches for big gains, but on a 4th-and-4 deep in Hawkeyes’ territory, Tanner Morgan hit Johnson in stride on a slant. If caught, it’s for sure a first down and probably goes for a touchdown. Instead, the ball fell to the ground and Iowa got the ball on a turnover on downs. After the game, he said it’s a play he has to finish.

Johnson has 28 career touchdowns and is three shy of Ron Johnson, who tops Minnesota’s chart all-time with 31. With two games left, potentially the Big Ten title game and a bowl game, Tyler Johnson has a great chance to put his name atop the history books.

PJ Fleck said it best after the loss, “It’s one game. Everything is still right in front of us.”

He’s absolutely right. With two games left, the Gophers control their own destiny when it comes to playing in the Big Ten Championship game. They can clinch the Big Ten West title as early as next Saturday, with a win at Northwestern and a Wisconsin loss to Purdue. But the game is at Camp Randall, and the Badgers are 24-point favorites.

The more likely scenario presents a game bigger than Minnesota’s historic 31-26 win over Penn State at TCF Bank Stadium two weeks ago. The Badgers come to Minneapolis to close out the regular season on Nov. 30, with the winner likely going to Indianapolis and potentially the Rose Bowl on Jan. 1. Rumors are swirling that ESPN’s College GameDay may come, after they chose Alabama over the Minnesota/Penn State game.

It simply doesn’t get any bigger than the Gophers and Badgers playing for Paul Bunyan’s Axe and the Big Ten West title, and it’s very likely to happen.