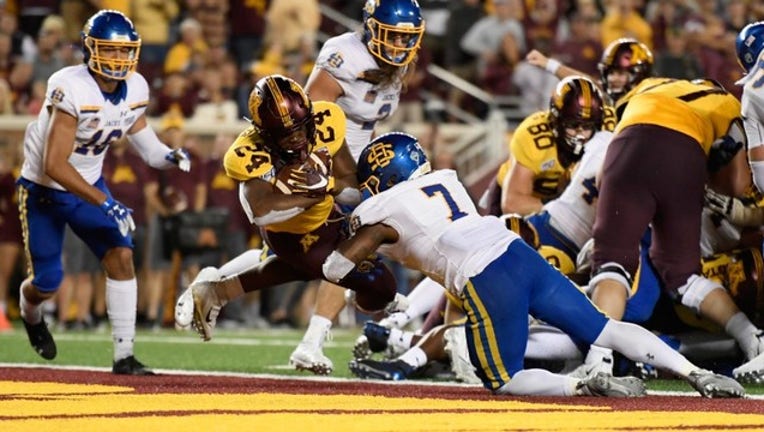 Mohamed Ibrahim #24 of the Minnesota Gophers scores a touchdown against Seven Wilson #7 of the South Dakota State Jackrabbits during the fourth quarter of the game on August 29, 2018 at TCF Bank Stadium. (Photo by Hannah Foslien/Getty Images)

A season with potentially high expectations started with near disaster for the Gophers, but they prevailed 28-21 against the Jackrabbits, the preseason No. 4-ranked team in FCS. They had big moments, faced adversity and got big plays when they absolutely had to have them.

Fans would've liked the win to be more comfortable, but the Gophers are 1-0 heading to Fresno State next Saturday night. Here are takeaways from the first win of 2019 at TCF Bank Stadium.

With South Dakota State doing everything it could defensively to take away Tyler Johnson, it was sophomore Rashod Bateman's night to shine. And did he ever, just two weeks removed from having to leave fall camp to mourn his uncle's death.

Bateman had five catches for 132 yards and a touchdown, which was seen all across social media Thursday night. His one-handed grab along the sideline for 42 yards gave the Gophers a 13-7 lead at the half. The sophomore, who turned down SEC offers in high school to play for Fleck, is poised to have a huge season. That's especially if teams continue to devote more than one defender to Johnson.

When he had time to throw, Tanner Morgan was mostly effective Thursday night. He made one bad throw for an interception after staring down a receiver, but finished 13-of-18 for 176 yards and the score to Bateman. He added a new wrinkle Thursday, with five carries for 22 yards.

If he takes the ball on the read option more than once per game, opposing defenses will have to respect it and have decisions to make against the Gophers rushing attack. He's now 5-2 as a Gophers starting quarterback.

The biggest takeaway from Thursday's game is that the Gopher offensive and defensive lines both leave room for improvement after the results against South Dakota State. The Gophers' offensive line averages 6-6 and 315 across the board, but struggled to get any push against the SDSU defensive front. Minnesota ran for just 3.1 yards per carry, and Tanner Morgan was sacked twice.

Flip to the other side of the line of scrimmage, and Minnesota's defensive front seven had trouble getting pressure on the Jackrabbits. The lone sack of the night came from Esezi Otomeu and Taiyon Devers, and sealed the win in the fourth quarter. The other pressure of the night resulted in a pick-6 for Chris Williamson.

The Jackrabbits ran for 5.1 yards per carry, and averaged 6.1 yards per play. That's not going to fly in the Big Ten season.

We have a kicker (sort of)

PJ Fleck never named a starting kicker in fall camp. Michael Lantz and Brock Walker split reps, and Lantz got the duties Thursday night. He finished 2-of-3 on extra points, and did not attempt a field goal. The Gophers went for a 2-point conversion, and converted, on their final score.

Will Fleck give Walker a chance at Fresno State, or is Lantz the guy? We won't know for certain until next Saturday.

The Gophers won the turnover battle 2-1, and it turned out to be the difference in the game. Chris Williamson ignited the Gophers, intercepting J'Bore Gibbs early in the third quarter and returning it 43 yards for a touchdown. It gave Minnesota a 20-7 lead at the time, and it came as a result of one of the few pressures on Gibbs in the game.

The Jackrabbits had the ball and were looking to extend their lead later in the fourth quarter when Gibbs and the center fumbled the snap. The ball was on the ground, and in the true "The ball is the program" fashion, Winston DeLattiboudere pounced. He recovered, and the Gophers had life, down 21-20. Minnesota turned it into points after Mohamed Ibrahim's 1-yard touchdown plunge.

South Dakota State also had two touchdowns, a kickoff return and a screen pass over the middle, negated by illegal block penalties.

It wasn't pretty and there's a lot of work to do, but a win is a win. There have been plenty of Gopher teams in the past that wouldn't win despite their play Thursday. The bottom line is they're 1-0 heading to Fresno State.