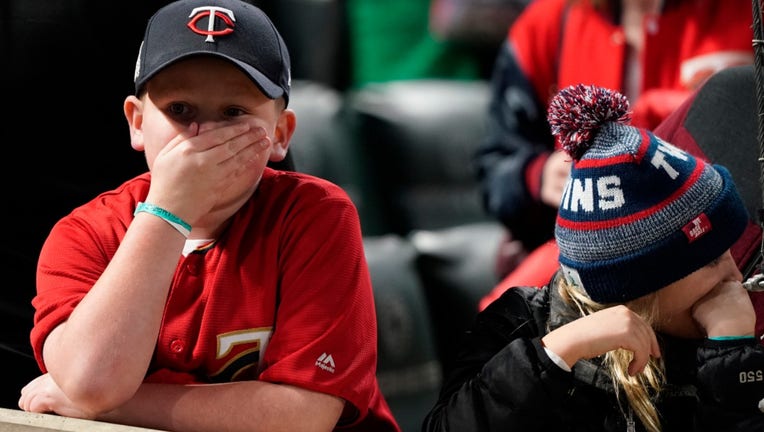 Anthony Hartmann, 10 of St. Peter, watched the end of the game as the Minnesota Twins lost to the New York Yankees during game 3 of their American League Division Series at Target Field on Monday, October 7, 2019. ( (Photo by Leila Navidi/Star Tribune via Getty Images) )

MINNEAPOLIS - One of the greatest seasons in Minnesota Twins history came to an end Monday night with a 5-1 loss to the New York Yankees, a series sweep by the Bronx Bombers.

The Twins won 101 games, two seasons removed from losing 100 games. They were the most prolific home run hitting team in Major League Baseball history, they featured one of the best offenses in MLB and got out to a hot start from Opening Day.

After an exciting 2019 season, the Twins are now looking forward.

Here are five takeaways from the season and playoff disappointment.

The Twins have never been known to be a prolific home run hitting team, until this year. Jonathan Schoop hit the team’s 300th homer of the season the day after they clinched the AL Central title in Detroit. The Twins edged the Yankees with 307 homers as a team in 2019, the most in MLB history. Veteran Nelson Cruz hit 41 bombas to lead the team, Max Kepler finished with 36, Miguel Sano had 34, Eddie Rosario had 31 and Mitch Garver ended up with 31.

Cruz, C.J. Cron, Jonathan Schoop and Marwin Gonzalez, all free agent signings, hit a combined 104 of the team’s 307 home runs. The Twins had five players with at least 30 home runs, which has never happened in the history of baseball. The Twins were one of the top slugging teams in MLB all year, and that needs to be appreciated.

The Twins got to 101 wins, won the division and hit for power despite a myriad of injuries all season. Byron Buxton missed the end of the season and the playoffs with a shoulder injury that required surgery. Max Kepler missed the end of the season and struggled at the plate in the playoffs with a shoulder injury. C.J. Cron battled a thumb injury all season after being hit by a pitch in Spring Training. Miguel Sano missed more than a month to start the season with a laceration on his heel. Kyle Gibson battled E. coli early, then fought ulcerative colitis at the end. Nelson Cruz ruptured a tendon in his wrist. Eddie Rosario and Luis Arraez battled ankle injuries. Marwin Gonzalez battled an oblique injury. Every team has injuries, but for the Twins to do what they did with all their injuries is incredible.

The Twins had a solid 1-2 punch in their starting rotation with Jose Berrios and Jake Odorizzi. They were dealt a blow in early September when Michael Pineda was suspended 60 games for testing positive for a banned MLB substance. It was in a diuretic that’s used to help lose weight and manage blood pressure. It put the Twins’ pitching situation in a bind as they were getting ready for the playoffs. Before the suspension, Pineda had gone 11-5 with a 4.01 earned run average in 26 starts, 146 innings.

With Kyle Gibson and Martin Perez both struggling with consistency, not having Pineda forced the Twins to start Randy Dobnak in a playoff game at Yankee Stadium. Not ideal. Pineda missed the last 21 games of the regular season, was not eligible for the playoffs and will miss the first 39 games of 2020.

Swept yet again after hitting disappears

After slugging their way to the AL Central title all season, the power all but went out in the Twins’ lineup over three losses to the Yankees. Jorge Polanco, Nelson Cruz and Miguel Sano all hit solo homers in Game 1 at Yankee Stadium. Eddie Rosario hit a solo shot in Game 3 at Target Field.

But the power hitting was few and far between for the Twins after what they had done to get to the playoffs. The Twins went 1-for-12 with runners in scoring position in Game 3. For the series, they finished 3-for-28. That’s not going to get it done against any team in the playoffs, especially the Yankees.

The Yankees are good enough on their own that they don’t need any help to score runs. The Twins’ pitchers not named Berrios and Odorizzi weren’t ready for the big moment. The Twins walked 17 Yankee hitters over three losses, 16 of them at Yankee Stadium. Kyle Gibson walked the bases loaded in Game 2 before giving up a bases clearing double. Twins’ relievers accounted for 11 of the 17 walks in the series.

Two Yankee batters were also hit. The moment seemed to be too big for certain pitchers who hadn’t experienced the playoffs better.

The Twins had too much talent to be knocked out of the playoffs in just three games. But as the saying goes, there’s always next year.