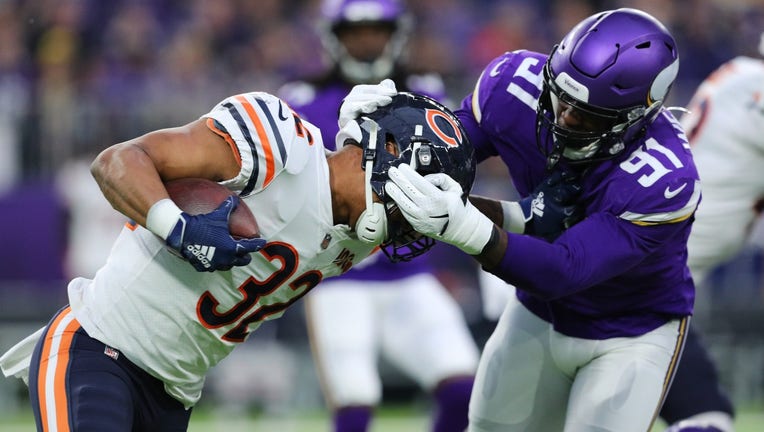 Stephen Weatherly #91 of the Minnesota Vikings tackles David Montgomery #32 of the Chicago Bears in the first quarter at U.S. Bank Stadium on December 29, 2019 in Minneapolis, Minnesota. ((Photo by Adam Bettcher/Getty Images))

MINNEAPOLIS - Stephen Weatherly is back where his NFL career started six years ago, signing a one-year deal on Monday to play with the Minnesota Vikings for the 2021 season.

Weatherly, a seventh round draft choice out of Vanderbilt in 2016, left Minnesota after four seasons in 2019 and signed a deal with the Carolina Panthers. He got his first experience as a full-time starter, making 17 tackles in nine games before having season-ending finger surgery.

The last year has been a learning experience for Weatherly. He told reporters Monday he got complacent after signing his deal with the Panthers.

"One of the things I learned about myself this past year is that I don’t need to be so safe, that I need to continue reaching and striving forward. I was kind of happy about the deal I had signed and a little bit of complacency set in," Weatherly said. "That can’t happen, no matter what I need to be striving and reaching for the next step. If I do slip or if I do fail, I fail because I was reaching for greatness."

With most of his time in Minnesota spent as a back-up defensive end, switching to being a full-time starter was an adjustment. By the time he had fully adjusted to his new role with the Panthers, his season was over due to injury.

Back with the Vikings, he’s ready to take another step forward after collecting a combined 59 tackles and six sacks in 2018 and 2019, before leaving for Carolina. He could compete for a starting spot on the 2021 defensive line, with Danielle Hunter back from neck surgery and Ifeadi Odenigbo, Hercules Mata’afa and D.J. Wonnum in the mix.

"I’m coming into be the best version of myself and compete for the starting spot. I would love to, if that’s where it shakes out," Weatherly said.

"Excited to sign Stephen Weatherly back. He’s a long, athletic defensive end that should help us in pass rush like he did when he was previously here," Vikings GM Rick Spielman said Monday.

Weatherly’s passions away from football also making him a compelling voice to re-introduce to a locker room that’s already familiar with him. He hopes to rejoin the Vikings’ social justice committee, and spoke Monday of the importance of bringing awareness to various causes as the trial of former Minneapolis police officer Derek Chauvin in the death of Georgy Floyd starts.

It’ll be the most important trial in the state’s history, and eyes around the world will be watching to see Chauvin’s fate. In a 2020 preseason practice at U.S. Bank Stadium, the Vikings, led by Ameer Abdullah, called for a full and complete prosecution of Chauvin in the incident.

"The same people that invest their money and their time into us, I feel like it’s only right that we fight for their behalf on a bigger platform, bring awareness to issues that maybe are overlooked nationally. Especially after what happened here with George Floyd," Weatherly said.

Weatherly also talked about his interest in cryptocurrency, joining a virtual chess club and his appearance as a guest judge on the Netflix show "Blown Away," a show about glass blowing.

"I watched it like I was watching film. I rewound it a couple times, watched it with mute to see my mannerisms. It was pretty dope, the whole experience was amazing. I watched the whole episode, no lie, like 30 times," Weatherly said.