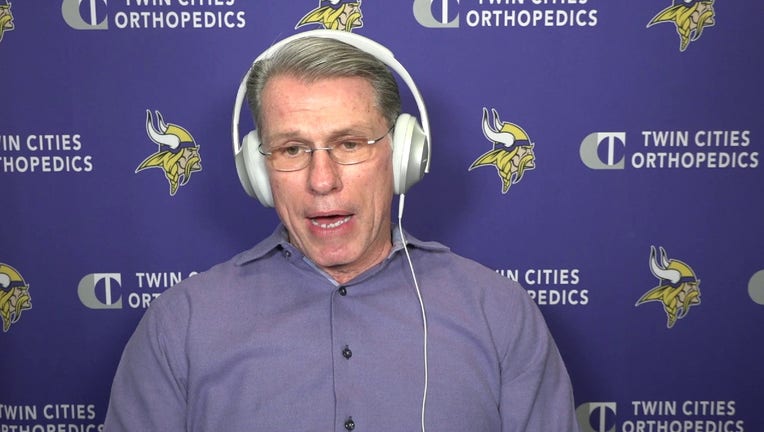 Minnesota Vikings GM Rick Spielman held his annual pre-draft session with reporters on Tuesday. The Vikings have the No. 14 overall pick in Thursday's first round.

MINNEAPOLIS - The Minnesota Vikings are on their bye week after rallying to beat the Carolina Panthers in overtime, 34-28, on Sunday to improve to 3-3 on the season.

It was a pivotal win for the Vikings to get, after starting 0-2 and 1-3, if they want to stay relevant in the NFC Playoff conversation. It’s the second straight week the Vikings have needed a walk-off victory. In Week 5, Kirk Cousins had to drive the offense for a game-winning field goal with 40 seconds to play to get a win over the Detroit Lions.

A loss, and the speculation would’ve started on the futures of Mike Zimmer and Rick Spielman in Minnesota. Spielman held his annual bye week session with reporters on Tuesday, and said he’s not concerned about his future with the Vikings despite the franchise missing the playoffs four times in seven seasons under Zimmer. Spielman has two years left on his current contract.

"I’m not going to talk about any of the conversations with the Wilf family. That’s between me and the Wilfs, but no, I have no concerns," Spielman said.

Spielman did have a couple positive updates on injured players. He said defensive tackle Michael Pierce, who’s missed the last two games with an elbow injury and is key in run defense, should return after the bye when the Vikings host the Dallas Cowboys on Halloween night. He also said Patrick Peterson should return for the Week 11 match-up against the Green Bay Packers.

Peterson, the Vikings’ top defensive back, went on injured reserve on Monday after injuring his hamstring late in Sunday’s win over the Panthers. He was defending DJ Moore on a deep pass down the sideline, and went down grabbing his right hamstring. He’ll have to miss at least the next three games, against the Cowboys, Ravens and Chargers, who are currently a combined 19-5.

It’ll be the first games Peterson misses in 11 years due to injury. With Peterson out, the the Vikings will turn to Cam Dantzler, Bashaud Breeland, Kris Boyd, Mackensie Alexander and likely try to get defensive snaps from Harrison Hand.

Also a hot topic is quarterback Kirk Cousins, or more specifically, the team’s financial obligation to him. Cousins is currently under contract through the 2022 season, and is due $45 million guaranteed next year.

On the field, he’s having one of the best seasons of his career through six games. He’s completing nearly 70 percent of his passes for 1,769 yards and 13 touchdowns. Most importantly, just two interceptions, and he’s led four drives in the first six games late in regulation to give the Vikings a chance to win.

Spielman was asked Tuesday if Cousins’ contract will get looked at in the offseason, related to the team’s salary cap.

"We’ve already looked at that two years ago. We looked at it this offseason. It’s all part of roster planning," Spielman said.