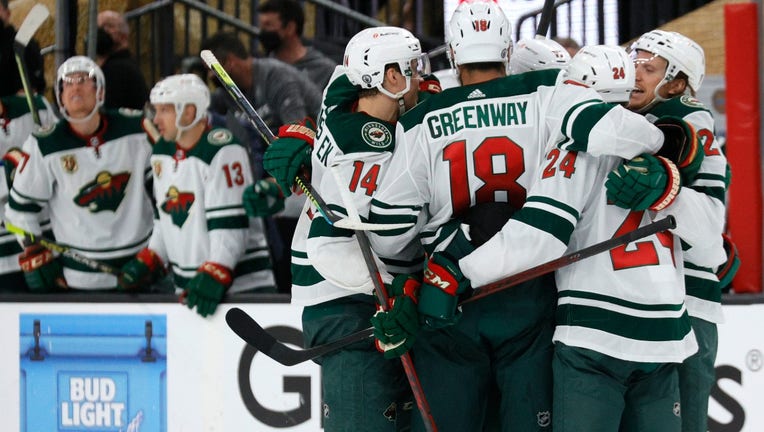 The Minnesota Wild celebrate a second-period goal by Matt Dumba #24 against the Vegas Golden Knights in Game Two of the First Round of the 2021 Stanley Cup Playoffs at T-Mobile Arena on May 18, 2021 in Las Vegas, Nevada.  ((Photo by Ethan Miller/Getty Images))

MINNEAPOLIS - The Minnesota Wild is in Vancouver to face the Canucks Tuesday night, but at least three coaches are not on the trip.

According to Michael Russo with The Athletic, two coaches and a video assistant are in COVID-19 protocols. They include assistant coach Darby Hendrickson, goaltender coach Freddy Chabot and T.J. Jindra. So far, no players have been impacted as everybody was on the ice Tuesday for morning skate ahead of facing the Canucks.

Wild head coach Dean Evason also has not been impacted. Evason was on the ice with the team for morning skate.

"We're trying to stay as safe as we possibly can," Evason told reporters on Tuesday after morning skate.

It’s not clear if the three have tested positive for COVID-19 or have come in close contact with a carrier. According to Russo, General Manager Bill Guerin was also away from the team for the first three games due to COVID-19 protocols. He has since rejoined the team, but is not in Vancouver because of having to be 14 days clear of the virus. Guerin is expected to be with the team Thursday night at the Seattle Kraken.

The Wild is looking to bounce back from its first loss of the season Sunday night, 5-2 against the Nashville Predators. The Wild closes out October at Vancouver, Seattle and Colorado this week before returning Nov. 2 to host Ottawa.