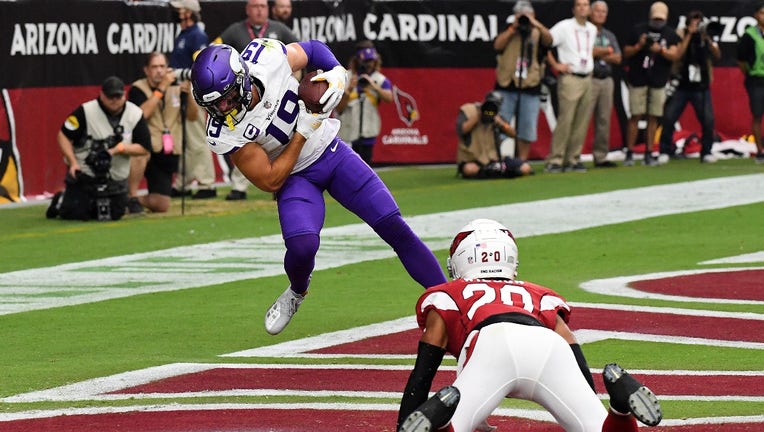 Adam Thielen #19 of the Minnesota Vikings catches a touchdown pass in the end zone as Marco Wilson #20 of the Arizona Cardinals looks on in the first quarter of the game at State Farm Stadium on September 19, 2021 in Glendale, Arizona.  ((Photo by Norm Hall/Getty Images))

MINNEAPOLIS - We’re two games into the NFL regular season, and it already feels like the Minnesota Vikings are at a crossroads.

The Vikings are 0-2, having lost their first two games by a combined four points. They now have three straight home games, starting with the Seattle Seahawks on Sunday for the 2021 home opener at U.S. Bank Stadium. It’ll be the first game in front of a capacity crowd in nearly two years.

Vikings Greg Joseph on his missed kick: ‘This one’s on me’

CAN MINNESOTA RECOVER FROM AN 0-2 START TO MAKE THE PLAYOFFS?

The statistics aren’t in the Vikings’ favor. It’s incredibly difficult for teams that start 0-2 to make the postseason. Currently, odds-makers have the Vikings at about a 61.5 percent chance to make the playoffs. It’s only two games, but they’re not leaving themselves any room for error after a slow start, at least in the win column.

IS MIKE ZIMMER COACHING FOR HIS JOB?

Let’s hope it doesn’t come to that. Mike Zimmer said after Sunday’s loss at Arizona they’re probably two plays away from being 2-0. If Dalvin Cook doesn’t fumble, the Vikings probably beat the Bengals in overtime. If Greg Joseph makes the 37-yard kick, the Vikings beat the Cardinals.

The Vikings next three games are against the Seahawks, Browns and Lions, all at U.S. Bank Stadium. Zimmer’s teams have missed the playoffs four of his seven seasons in Minnesota. The franchise invested in defense this offseason, and has plenty of playmakers. If they’re not a playoff team, change might be coming.

WHAT HAPPENED TO BASHAUD BREELAND?

The Vikings were hoping Bashaud Breeland, a free agent signing, would be an impact player in the secondary. So far, it hasn’t worked out. Week 1, he committed a costly penalty late in the first half that led to a touchdown, then gave up a long touchdown to Ja’Marr Chase. Things didn’t get much better against the Cardinals. There’s still time to improve, but it’s been a rough start for Breeland.

CAN THE OFFENSIVE LINE BUILD OFF WEEK 2?

The Vikings’ offensive line bounced back from a horrific Week 1. They committed 10 penalties, Kirk Cousins got sacked three times and they couldn’t establish the run. Sunday, there were just two penalties in the second half, Cook ran for over 100 yards and Cousins had time to find receivers. Which offensive line we see the rest of the way could play a big factor in the season.

HAVE THE VIKINGS FOUND THEIR NO. 3 RECEIVER?

Nothing is permanent in the NFL, but KJ Osborn appears to be the guy for the Vikings behind Justin Jefferson and Adam Thielen. Osborn had a great training camp, and caught his first career touchdown pass at Arizona on the second play of the game. He made seven catches in his Week 1 debut, including a key fourth down conversion late in regulation. He had another one against the Cardinals. He’s made plays in big spots, and Kirk Cousins trusts him.

WHEN WILL WE SEE ANTHONY BARR?

Good question. Anthony Barr hasn’t had a full practice since Aug. 5, and he’s missed the first two games dealing with a knee injury. Barr is one of the Vikings’ top defensive players and typically calls plays, but he can’t help them if he’s not playing. We don’t know when Barr will return, Mike Zimmer says he feels good and then he’s not on the practice field. As we wait, Nick Vigil holds his spot.

WILL THE VIKINGS STICK WITH GREG JOSEPH?

Probably, but you never know with Mike Zimmer. Joseph missed wide right from 37 yards as time expired Sunday, in the latest painful experience with a kicker. He made two earlier in the game from 52 yards out, and made a 53-yarder at Cincinnati to force overtime. Dan Bailey, Daniel Carlson and Blair Walsh all lost their jobs because of inconsistency. Zimmer defended Joseph on Monday, which indicates he’s not going anywhere.

IS NICK VIGIL READY TO TAKE OVER CALLING DEFENSE FULL-TIME?

It certainly appears so. Without Anthony Barr, Nick Vigil has assumed defensive play-calling duties. He’s been a star, capped by intercepting Kyler Murray and returning it 38 yards for a touchdown. He also nearly had a fumble recovery in the first half. Vigil has 18 tackles and a sack through two games, and diagnosed an audible at Arizona pre-snap on a run that Eric Kendricks stuffed. Vigil has been a free agent steal through two games.

HOW WORRIED SHOULD WE BE ABOUT DALVIN COOK'S ANKLE?

We’ll find out Wednesday when the team holds its first practice in preparation for Seattle. Cook typicall talks to media on Wednesdays, and he hobbled through the second half of Sunday’s loss. He’s one of the top offensive weapons for Minnesota, with 42 carries for 192 yards and a touchdown through two games. He’s also got eight catches for 60 yards. That’s 50 touches through two games.

Mike Zimmer downplayed his ankle injury suffered in Arizona, but he was clearly struggling. Stay tuned, the Vikings will need Cook healthy to have any chance at the playoffs.