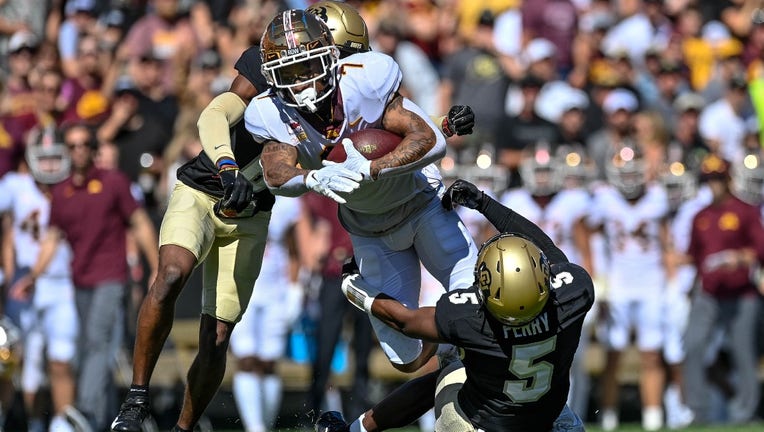 Wide receiver Chris Autman-Bell #7 of the Minnesota Golden Gophers is tackled by safety Mark Perry #5 of the Colorado Buffaloes in the first quarter of a game at Folsom Field on September 18, 2021 in Boulder, Colorado.  ((Photo by Dustin Bradford/Getty Images))

MINNEAPOLIS - After the University of Minnesota football team finished a 30-0 beat down of Colorado on Saturday in Boulder, PJ Fleck greeted Athletic Director Mark Coyle and turned him toward the bleachers.

They both looked up to see at least three sections filled with maroon and gold, Gophers’ fans who had made the trip to see the game for their own eyes. An estimate of between 7,000 and 10,000 fans watched as the Gophers manhandled the Buffaloes to improve to 2-1 on the season. It’s the first time the Gophers have shut out a Power 5 team since Illinois in 1977.

It was their first shutout against a non-conference opponent since 2006, when they blanked both Kent State and Temple.

"We have incredible fans who love the Gophers. Just so proud of the way they travel, the loyalty they continue to show. It’s so positive for our players to see. That’s what this place is capable of doing," Fleck said Monday.

It was as complete a performance the Gophers have had since their historic 11-2 season in 2019. Trey Potts ran for 121 yards and three touchdowns, the defense held the Buffaloes to 63 total yards and collected four sacks. Minnesota dominated both sides of the line of scrimmage. Now, the Gophers wipe that slate clean and prepare for a Homecoming game against Bowling Green before going back into Big Ten play.

FLECK FINDS ‘PAIR AND A SPARE’ WITH POTTS, IRVING & THOMAS

It’s no secret that teams led by PJ Fleck run the football. The Gophers had to find other options after Mo Irbahim went down with a season-ending injury against Ohio State. Enter Trey Potts, who had 34 carries for 178 yards and two scores against Miami (Ohio). Saturday, he had 26 carries for 121 yards and three scores.

But he can’t do it alone, and he didn’t have to on Saturday. Mar’Keise "Bucky" Irving had 15 carries for 89 yards, and Ky Thomas had seven carries for 66 yards, and his first career touchdown in the fourth quarter. It was all part of a 262-yard rushing day for Minnesota.

"When the best player, I think, in the conference goes out, everybody has to be able to take a piece of that burden upon themselves, no matter if you’ve played or not, whether you’re a freshman or a senior, and excel your learning and your development and your responsibility to the team and that’s what makes a team a team," Fleck said.

Gophers’ fans finally got to see the 2021 debut of Chris Autman-Bell Saturday, after missing the first two games with an injury suffered during fall camp. Autman-Bell finished with four catches for 79 yards, including a 32-yard grab that set up Potts’ first score.

Fleck is happy to have his top receiver from 2020 back healthy.

"He’s strong, he’s not a 6-4, 220-pound guy, but he plays violent and he plays strong," Fleck said. "You talk about a kid that loves football, and it’s just good to have him back in the rotation."

The Gophers enter the game 31-point favorites, but don’t expect them to look past Bowling Green with a road trip to Purdue two weeks away. Minnesota has made a habit out of making life difficult against non-conference teams. The Gophers’ 2019 non-conference season included needing rallies to beat South Dakota State and Georgia Southern, and double overtime to beat Fresno State.

There’s a lot going on with alumni coming to town and a parade, but the whole point of Homecoming is to win the football game.