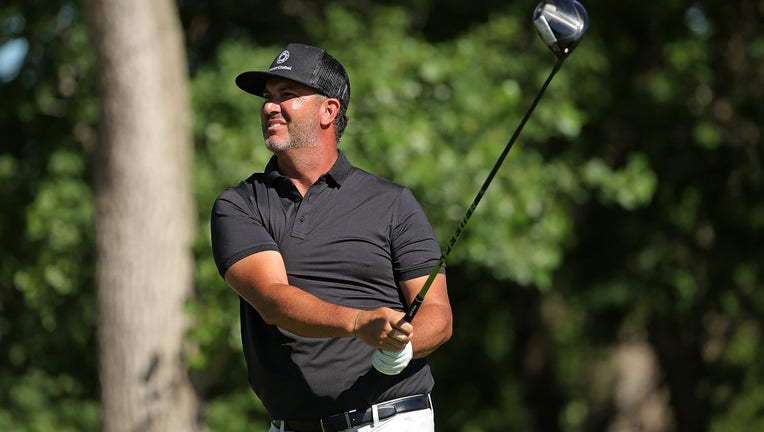 Scott Piercy of the United States plays his shot from the 11th tee during the first round of the 3M Open at TPC Twin Cities on July 21, 2022 in Blaine, Minnesota.  ((Photo by Stacy Revere/Getty Images))

MINNEAPOLIS - The fourth-annual 3M Open got underway bright and early Thursday morning at TPC Twin Cities with some of the PGA Tour’s top professionals teeing off the front and back nine, and having to manage gusting winds throughout the day.

By the mid-afternoon, Scott Piercy and Sungjae Im grabbed the first round lead as they each shot 6-under par 65. Both made seven birdies, and each had one bogey on the day. Piercy made four birdies on the back nine, his first nine of the day, and had three birdies on the front side before finishing with a bogey five on the par-4 No. 9.

Scott Piercy and Sungjae Im each shot 6-under par 65 on Thursday at TPC Twin Cities to share the lead after the first round of the 3M Open.

He’s familiar with being in the lead at the 3M Open. He shot a tournament record 62 to open the inaugural event in 2019. He also changed his swing coach, caddie and putter in the last week.

"I felt like I struck the ball well all day. If I can ride that putter, which I don't like to talk about a whole lot. I'm normally a ball-striker and the ball-striking hasn't been there either. Hitting 16 greens today and being able to roll in a few putts with the wedges being close, it's kind of like a perfect formula for me," Piercy said.

Fargo native and former two-time Minnesota State Amateur champion Tom Hoge has himself in contention after just 18 holes. He’s in a group tied for third after shooting a 4-under par 67. Hoge started with two birdies in his first three holes, then had his only blemish of the day on the par-5 No. 18. He reached it in two, but 4-putted for a bogey six.

"It was a good day for me. Other than the putts on 18, it was a pretty solid day for me," Hoge said. "I love coming back here. I've played so much golf around the area, I just feel comfortable being in the area."

Hoge has had a good year, winning the AT&T Pebble Beach Pro-Am and having four total top-10 finishes. He's 17th in the FedEx Cup standings entering the week.

Also in that group tied for third is Tony Finau, the No. 16-ranked player in the world. Finau made four birdies on his first nine and after an opening bogey to start with a 3-under 32. He birdied No. 12, then got on the green in two on the par-5 18th. But Finau three-putted for par, missing a short birdie attempt that would’ve given him solo second heading into Friday.

"I played really nicely. I thought it was pretty tricky. There was enough wind up there to kind of affect every shot, putting and hitting, but I steadied the ship pretty good," Finau said. "I held it together really nicely and my ball-striking really came through for me to kind of make the golf course gettable on a day like today."

Finau is the only player in the top-20 in the world who has come to Blaine to play the 3M Open since its inception in 2019.

"I love it here. I think Minneapolis is a great place. I have family here, it's a good golf course, I like the golf course, great fans and great food. It's a hard place to beat," Finau said.

Thursday’s opening round wasn’t as great for Edina native Mardy Fish, who spent 15 years in professional tennis and is a two-time winner on the celebrity golf circuit. Playing in the 3M Open on a sponsor’s exemption and making his PGA Tour debut, Fish shot a 10-over par 81 and has a lot of work to do Friday to make the weekend.

Hideki Matsuyama, the highest-ranked player in the 3M Open field at No. 14 in the World Golf Rankings, shot a 6-over par 77 that included a quadruple bogey nine on the par-5 18th. He hit three balls in the water, and withdrew from the tournament after the round with a sore wrist.

He wasn't the only player to struggle on the 18th. Harry Higgs was 3-under par heading to the final hole, then made a 10 on the par-5 after putting three shots in the water and finished with a 2-over par 73.