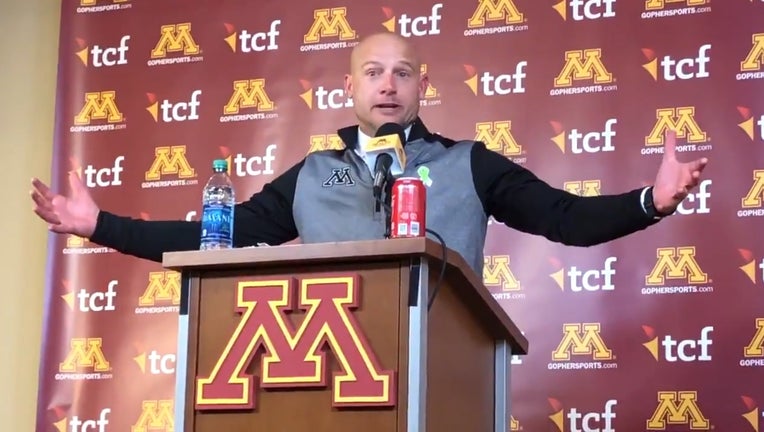 Coach Fleck made an impassioned speech Saturday after his team crushed Maryland, 52-10.

MINNEAPOLIS (FOX 9) - In two weeks, the Gophers will face the biggest game of the season as the unbeaten team hosts another 8-0 squad at TCF Bank Stadium.

After bye weeks for both teams, Penn State will make the trip to Minneapolis to take on the Gophers. But, Gophers coach P.J. Fleck is hoping for other visitors are following Penn State to Minnesota. He's hoping for national attention on what will be a major game for the university.

Speaking after Minnesota's thrashing of the Maryland Terrapins on Saturday, Fleck said ESPN should come to town for the November 9 matchup.

"I've said, I hope College GameDay really looks at our Twin Cities, our university, truly to bring GameDay here," he said. "We have 4 million people who live in the Twin Cities area. We are the only Division I school in the state of Minnesota. Everybody here is Gophers."

Fleck further explained the impact the show can have on programs and players by detailing his experience with the program.

"If they thought they got large crowds before, wait until 4 million people show up," Fleck concluded.

His team backed up his call with a tweet in the form of a letter to ESPN with the Gophers' undefeated resume.

The Gophers improved to 8-0 for the first time since the 1940s after Saturday's win at home. The team's game against Penn State is the start of a tough stretch for the Gophers to cap off the season.