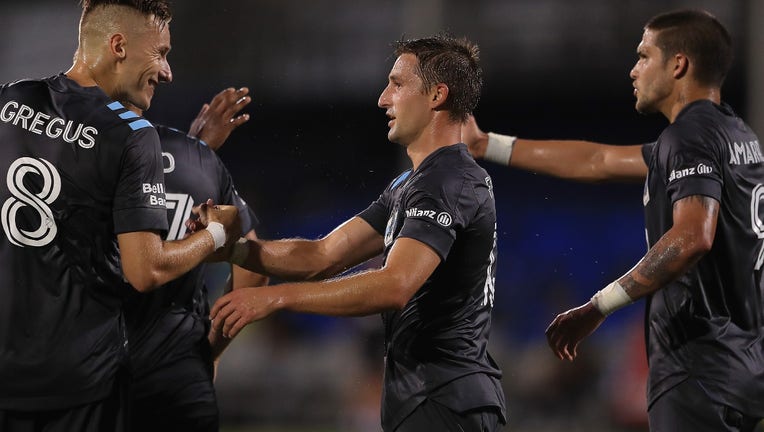 Ethan Finlay (C) #13 of Minnesota United celebrates after scoring the first goal of his team during a match against Colorado Rapids as part of MLS Is Back Tournament at ESPN Wide World of Sports Complex on July 22, 2020 in Reunion, Florida. ((Photo by Mike Ehrmann/Getty Images))

MINNEAPOLIS - Satisfied, but also disappointed. Minnesota United left the pitch early Thursday morning feeling like it let a winnable game slip away in a 2-2 draw against Colorado Rapids at the MLS is Back Tournament in Florida.

The Loons could’ve won Group D with a victory heading into the knockout round. Instead, they’ll get a couple extra days rest before facing the Columbus Crew in the World Cup-style knockout round of 16. Columbus won Group E with a 3-0 record and has scored seven goals. More importantly, they haven't allowed any in three games.

In the big picture, what matters is Minnesota United will be one of 16 teams left when knockout play starts. They still don't like leaving the field with a tie.

“Tonight we came up a little bit short. We absolutely played some of our better soccer for most part tonight, so there’s some positives to take from it. I still think most of the guys in the locker room are disappointed with a draw against a team we think we can beat,” said midfielder Ethan Finlay, who scored both Loons’ goals Wednesday night.

Minnesota United entered the game without Kevin Molino, who is dealing with a hamstring injury. Colorado Rapids struck first on Kei Kamara’s goal in the 18th minute. Ozzie Alonso lost possession and thought he had been taken down for a penalty, and it created an odd-man advantage that Colorado capitalized on.

The Loons tied the game 1-1 in the 35th minute on a set piece. Jan Gregus, on a free kick, found Finlay at the near post. His toe touch flick beat the keeper for a goal.

Minnesota United took the lead in the 42nd minute after Gregus hit Romain Metanire on a run. Metanire centered it for Finlay, who was there for the finish.

“Tonight it’s always nice for wide guys to get on the scoresheet because of the amount of runs he makes into the box. I’m pleased for him, that’ll do his confidence no end the fact that he’s scored a couple of goals and he’ll obviously be itching to play his old team, Columbus next Tuesday,” Loons’ coach Adrian Heath said.

Colorado Rapids tied the game in the 58th minute after Minnesota United failed to clear a free kick. Jonathan Lewis, who gave Colorado a second half spark with several chances, rifled a shot past Tyler Miller for the equalizer.

The Loons are now off to a 3-0-2 start in their first five games. That’s 11 points to start the season, and hopefully they’ll be meaningful for whatever the rest of the MLS season looks like after the Florida tournament.

Heath said postgame he feels the Loons have gotten better each game, and it should serve them well in the knockout stage.

“We were better tonight and I think we’ll be better for tonight’s performance,” Heath said. “I’m more than hopeful that we’ll be prepared for the game against Columbus.”

Now the focus turns to the Columbus Crew. The winner of the round of 16 advances to the quarterfinals. The loser goes home. They’re the only 3-0 team in the tournament thus far, second in the tournament with seven goals scored leading the MLS in goal differential.