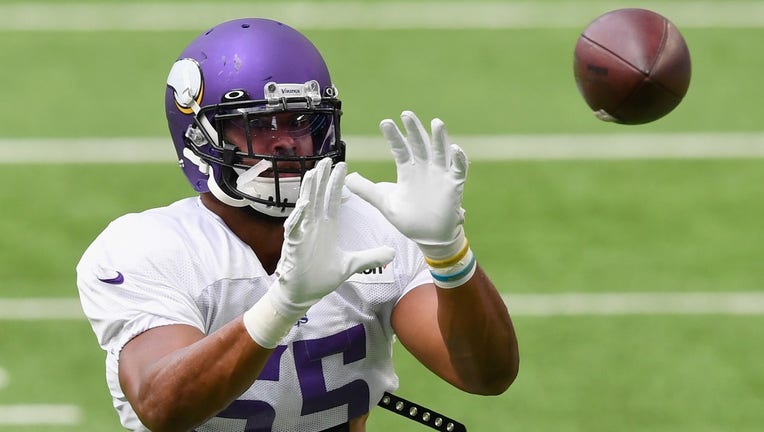 Anthony Barr #55 of the Minnesota Vikings runs a drill during training camp on August 28, 2020 at U.S. Bank Stadium in Minneapolis, Minnesota.  ((Photo by Hannah Foslien/Getty Images))

MINNEAPOLIS - For the first time in more than a year, Anthony Barr is expected to be on the field Sunday when the Minnesota Vikings host the Detroit Lions at U.S. Bank Stadium.

Barr practiced all of last week, then ultimately decided he couldn’t go as the Vikings lost to the Cleveland Browns 14-7. It’s been a long journey for Barr, who tore a pectoral muscle during Week 2 of the 2020 season after tackling Jonathan Taylor, which required season-ending surgery.

After starting the year a little banged up, linebacker Anthony Barr could return to the field for the Vikings this Sunday.

He’s missed about a month of practice and the first four regular season games, dealing with a knee injury. He watched helplessly from the sidelines last year as the Vikings finished 7-9 last season, missing the NFC Playoffs. He’s now tasked with helping Minnesota climb out of a 1-3 start.

"It’s been difficult. Mental health, it’s a real thing. I’ve had my down days, down months, but I’m fortunate to have a great support system with my family, friends. I think realizing there’s a lot more to life than football. That’s been my life since I was 9 years old, so not having that part of it was tough," Barr said Wednesday. "I promise you nobody wants to play more than me. It’s all I want to do, so I’m just happy to be at a point where I can finally do that again."

Barr was a full participant at practice Wednesday for the first time all season, an encouraging sign that he'll play Sunday. So how anxious is he to get back on the field? Barr is the defensive play-caller, responsible for getting the defense aligned before every snap.

"Extremely. Very excited, there will be a lot of emotions but at the end of the day I’ve just got to come do my job and help us get a win," Barr said.

In his absence, Nick Vigil is third on the defense with 30 tackles, has one sack and returned an interception for a touchdown at Arizona. Vigil did not practice on Wednesday with an ankle injury.

Barr has missed 18 straight games, but is in his third week of practice and getting back in football shape. Vikings coach Mike Zimmer said on Monday he expects Barr to play against the Lions.

Dalvin Cook played 33 offensive snaps and finished with nine carries for just 34 yards in Sunday’s loss to the Browns. Cook missed the Vikings’ 30-17 win over the Seattle Seahawks with an ankle injury, suffered in the second half in the team’s Week 2 loss at Arizona after being tackled by JJ Watt.

Cook, who tore his ACL his rookie year and has dealt with a bad hamstring in the past, now adds the ankle to his injury list. He said Wednesday he’s not 100 percent, but is going to play through the pain.

Cook did not practice Wednesday.

IS SUNDAY’S GAME AGAINST THE LIONS A MUST-WIN?

We’re only four games into the regular season, but Sunday’s game against the Detroit Lions sure feels like one the Vikings have to have if they want to stay in the playoff conversation. Minnesota is off to a 1-3 start, with the three losses coming by a combined 11 points.

Detroit comes to Minnesota in a similar spot, 0-4 with three close losses to the 49ers, Ravens and Bears.

"They’ve been close. They scored 31 against San Francisco, had a good chance to beat Baltimore. They went right down the field against Chicago twice and turned the ball over. We’re going to be on our Ps and Qs," Zimmer said.

If they lose to the Lions and drop to 1-4, speculation on the future of Zimmer and Rick Spielman in Minnesota will heat up. Zimmer has said multiple times this season he feels the Vikings are a good football team, despite their 1-3 mark.

"It’s a razor’s edge, it’s a play here or a play there. There’s so much to play for and it’s a long season, lot of football up ahead. That’s really what we’re focusing on," quarterback Kirk Cousins said.

"We’ve just got to go play, that’s it. Forget last week, that’s what we’ve got to do. We let some games slip, but we’re going to keep fighting ahead and keep pushing," Cook said. "It’s the NFL, on any given Sunday you could lose to anybody."