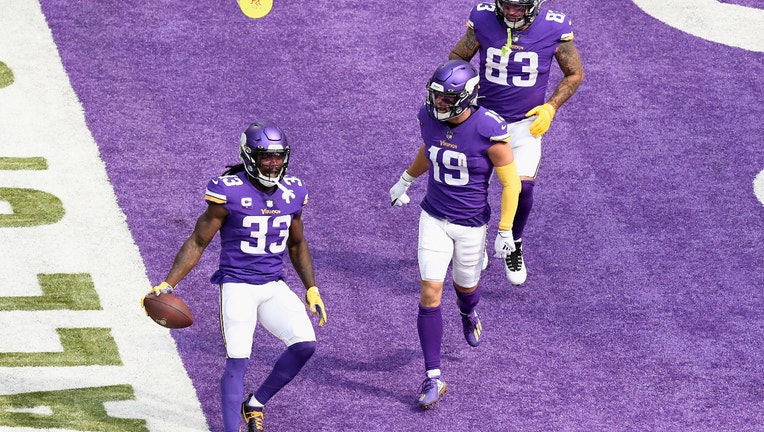 Dalvin Cook #33, Adam Thielen #19 and Tyler Conklin #83 of the Minnesota Vikings celebrate a touchdown against the Tennessee Titans by Cook during the first quarter of the game at U.S. Bank Stadium on September 27, 2020 in Minneapolis, Minnesota. ((Photo by Hannah Foslien/Getty Images))

MINNEAPOLIS - Because there can never be enough football, the NFL made it official on Tuesday that they’re adding a game for all teams to the 2021 schedule.

That means all NFL teams will have a 17-game regular season. Commissioner Roger Goodell also said Tuesday the NFL will move three preseason games for the 2021 season. For the Vikings, it means they will have an extra road game on the schedule. They will face the Chargers in Los Angeles to finish the regular season.

The Vikings will get a ninth home game in the 2022 season. In 2021, they'll get one exhibition game on the road and two home preseason games before Week 1.

The NFL hasn’t officially released the 2021 schedule yet, so we don’t know who the Vikings will open the regular season with. Last year, it was against the rival Green Bay Packers an empty U.S. Bank Stadium. The hope is when the season starts in September, the Vikings can have more than 60,000 screaming fans at U.S. Bank Stadium. Goodell said Tuesday the plan as of now is to welcome fans back at full capacity in NFL stadiums across the league.

The Vikings didn’t have any fans at home games in 2020 due to the COVID-19 pandemic. The only people that did attend games were family and friends of players, and approved first responders.

The Vikings finished 7-9 in 2020 and missed the NFC Playoffs for the fourth time in seven seasons under Mike Zimmer.