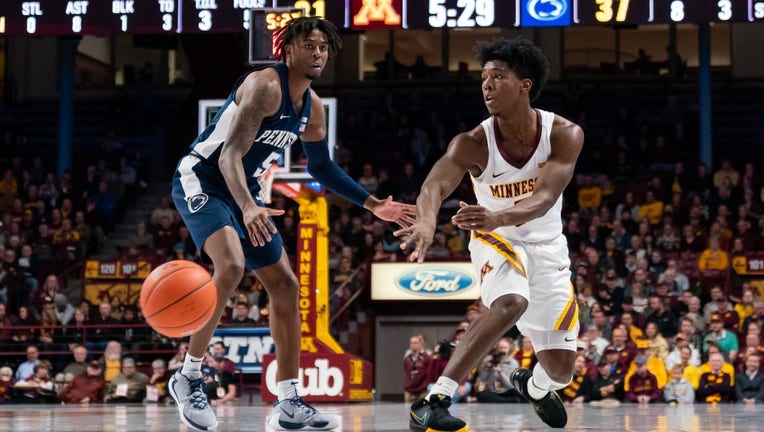 Marcus Carr scored 27 points and had nine assists in Minnesota's 75-69 win over Penn State on Wednesday at Williams Arena. ((credit: University of Minnesota))

MINNEAPOLIS - The NCAA Division I Council announced Wednesday that it has approved Nov. 25 as the start date for the college basketball season.

The decision comes as the NCAA aims to have a season despite the COVID-19 pandemic, which forced the NCAA to cancel conference tournaments and March Madness, ending the 2019-20 season without finality. The NCAA Division I council said men's and women's teams can start practicing up to 12 hours per week, eight on the court, starting Sept. 21. Team practices can start Oct. 14.

There will be no exhibitions or scrimmages at all this season due to the COVID-19 pandemic. The regular season for all teams will be reduced by four games, a maximum of 27 for all teams.

It’s welcome news for University of Minnesota men’s basketball coach Richard Pitino, who is celebrating his 38th birthday on Wednesday. The Gophers are coming off a 15-16 season and had beaten Northwestern in the Big Ten Tournament when the remainder of the season was canceled due to the COVID-19 pandemic.

The Gophers will have as many as six new faces on the roster this season. The incoming freshmen include guards David Mutaf and Jamal Mashburn Jr., and forward Martice Mitchell. They’ll have a new center in Drake transfer Liam Robbins, who recently had his waiver for immediate eligibility approved. Brandon Johnson, a graduate transfer from Western Michigan, is expected to compete for the starting power forward spot. Austin native Both Gach also transferred from Utah, and will likely be in the starting backcourt if his waiver for immediate eligibility is approved by the NCAA.

Lindsay Whalen and the Gophers' women's basketball team is coming of a 16-15 season, and looking to improve on a 5-13 mark in Big Ten play.

The Gophers men's and women's programs have not yet announced their 2020-21 schedules, or if either program will be able to have fans at Williams Arena this season.