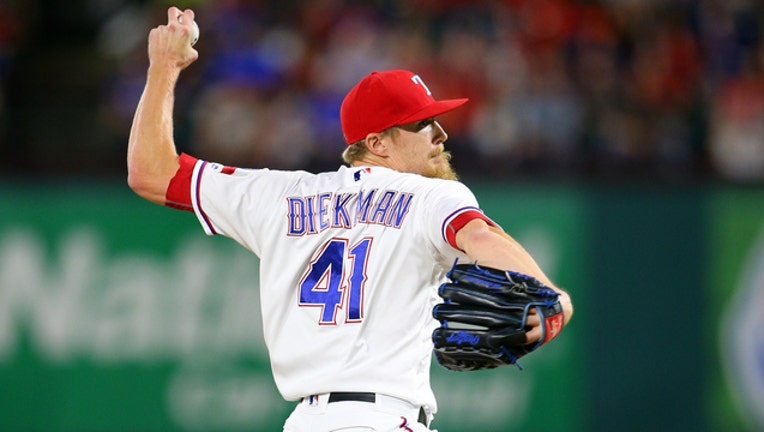 ARLINGTON, TX - SEPTEMBER 02: Jake Diekman #41 of the Texas Rangers throws in the eight inning against the Houston Astros at Globe Life Park in Arlington on September 2, 2016 in Arlington, Texas. (Photo by Rick Yeatts/Getty Images)

(FOX NEWS) - As the Major League Baseball trade deadline came and went Tuesday, a handful players found themselves moving on to a new team.

But none had an easier transition than Texas Rangers pitcher Jake Diekman, who was traded to the Arizona Diamondbacks.

By coincidence, the D-backs and Rangers were in the middle of a series in Phoenix when the deal for Diekman was made. So following Tuesday night’s game, the pitcher was driven by golf cart from the visiting clubhouse to his new home just across the way, according to Deadspin.

A video posted to Twitter showed D. Baxter the Bobcat, Arizona’s mascot, picking up Diekman in a baseball-style golf-cart, before driving him less than a minute down the hall to the Arizona clubhouse, where he met his new teammates.