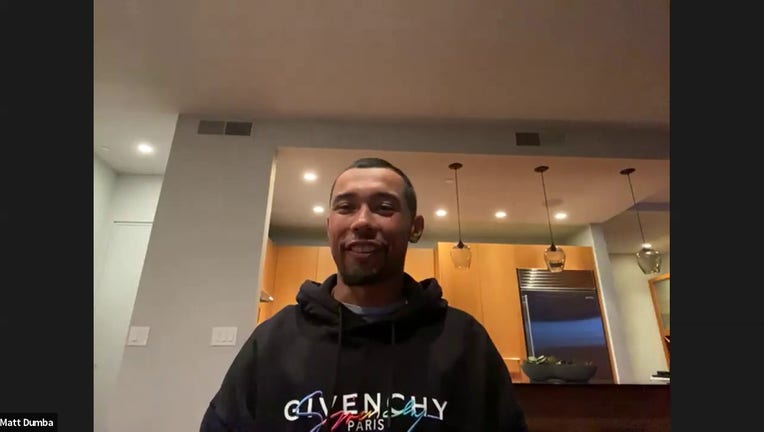 Wild defenseman Matt Dumba spoke Sunday night after winning the King Clancy Memorial Trophy for his work with the Hockey Diversity Alliance and in Minneapolis to fight racism after the death of George Floyd.

MINNEAPOLIS - When he’s not busy trying to rifle slap shots past opposing goaltenders, Minnesota Wild defenseman Matt Dumba is doing his best to eradicate racism and social injustice from the NHL.

He’s an executive committee leader for the league’s Hockey Diversity Alliance, and on Sunday, he was named the winner of the King Clancy Memorial Trophy. The award goes annually to the player who best exemplifies leadership qualities on and off the ice, and has made noteworthy humanitarian contributions in his community.

Dumba is the epitome of that, starting with his work with the ACES Foundation since he came to Minnesota five years ago. He then became inspired to fight racism after George Floyd’s death in south Minneapolis on Memorial Day. Four Minneapolis police officers have been fired since the incident, and Derek Chauvin is facing murder charges in Floyd’s death after having his knee on Floyd’s neck for several minutes.

The incident sparked weeks and months of demonstrations and rioting and racial tensions hit a new high in Minneapolis.

Minnesota Wild defenseman Matt Dumba talked Tuesday about being on the executive committee for the Hockey Diversity Alliance to bring an end to racism and social injustice across hockey.

“I think just with all the craziness in the world, with what happened to George Floyd, that initiated it. Watching something as disgusting as that, it really can get your blood just boiling. I was at a point where I just knew I had to do something, then you get into conversations with the HDA and experiences other players have had in hockey growing up,” Dumba said Sunday night. “That’s where I took a stand for this generation coming up, not having to go through what some of us have been.”

Dumba launched Rebuild Lake Street back in June, an effort to help south Minneapolis business owners who had their companies destroyed or damaged in the riots after Floyd’s death. Dumba matched up to $100,000 in donations for the charity, and the Wild and NHL contributed $50,000 each.

Dumba also is leading the charge in eliminating racism from hockey. Along with his work with the HDA, Dumba took a ceremonial knee before the first game in the NHL bubble in Edmonton to raise awareness for racism. He also raised his fist during the National Anthem before Wild playoff games.

He got out of his comfort zone and was at a loss for words when talking about getting the King Clancy Memorial Trophy.

“I’m very comfortable with it. I spend hours and hours each week on calls with the Hockey Diversity Alliance and talking about these issues. For me it wasn’t ever trying to be a face of something, it’s just trying to make a difference in my community and in a game that I love,” Dumba said.