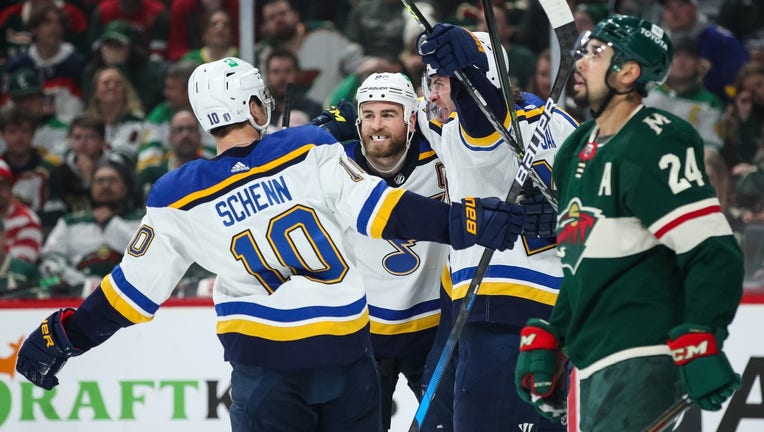 The St. Louis Blues celebrate a goal by David Perron #57 as Matt Dumba #24 of the Minnesota Wild reacts in the first period in Game One of the First Round of the 2022 Stanley Cup Playoffs at Xcel Energy Center on May 2, 2022 in St Paul, Minnesota.  ((Photo by David Berding/Getty Images))

MINNEAPOLIS - So much for having home ice advantage in the Stanley Cup Playoffs.

The Minnesota Wild went 8-1-1 in its last 10 regular season games to earn the right to face the St. Louis Blues in Game 1 Monday night at Xcel Energy Center. They did nothing to seize the opportunity in front of a sellout crowd in a 4-0 loss to go down 1-0 in the best-of-seven series.

David Perron was the star for the Blues, netting a hat trick all on rebound goals, including a pair of power play goals. Ville Husso made 37 saves in the shutout for St. Louis, in his first career playoff game.

"It’s got to change big time. I think you just look at the game and we had a lot of chances. You give credit to Husso, he made a lot of great saves. There was big moments in the game and they capitalized on them, and we didn’t," Wild winger Marcus Foligno said. "That’s playoff hockey."

The Wild is now 0-4 against the Blues this season, and the road got a lot tougher for their first playoff series win since 2015.

"History shows us that this won’t bother us. We’ll regroup, we’ll come back, we’ll be a better team," Wild coach Dean Evason said. "We’ll stay the heck out of the box and we’ll play 5-on-5 and we’ll give ourselves a better chance to have success."

Evason made the decision to start Marc-Andre Fleury in net over Cam Talbot Monday night, and he’ll face questions in that call leading up to Game 2. Talbot hadn’t lost a game in two months, and Fleury gave up rebounds all night after making a big save in the first period on a penalty shot, the first of his career in a playoff game, on Pavel Buchnevich.

Fleury has won three Stanley Cups, and has the playoff experience many on the Wild roster lack. But Perron took advantage of every rebound Fleury gave him Monday.

"I don’t know. He’s a good shooter and he’s around the net. It seems like every puck on the power play just ended up on his stick on the back door there,’ Fleury said. "He’s a good player, and he put it in."

The Wild went 0-for-6 on the power play Monday night and out-shot the Blues 37-31 for the game. Minnesota and is now 0-4 in Game 1s on their home ice. The Wild went onto lose the previous three series.

In addition to going without a goal in five power plays and having their sixth negated by a Kevin Fiala high-sticking penalty, the Blues went 2-for-6 on the man advantage.

"You can say what you want about special teams. Our power play had some unbelievable chances. Their goalie played great, ours played great. They got a couple bounces on the PP," Evason said.

The Blues took a 2-0 lead after 20 minutes, thanks to Perron and Ryan O’Reilly. Perron scored on the man advantage at the 6:15 mark of the first period, on an open rebound after an O’Reilly shot. O’Reilly scored at 15:56 after a tipping an initial shot to the net and collecting his own rebound.

Perron scored a rebound goal at 16:30 of the second period to give the Blues a 3-0 lead. He completed his hat trick with another rebound goal at 12:34 of the third period, just after a power play had expired. The Wild possessed the puck and had plenty of scoring chances, but couldn’t solve Husso. They also hit four posts.

"We can’t say we didn’t try. We had great opportunities 5-on-5 and on the power play as well, hit a bar many times today. Just got to let it go now, it’s Game 1," Fiala said. "It’s playoff hockey, it’s best-of-seven so we’ve got to be ready for the next one."

The Wild might need to prepare to be without captain and defenseman Jared Spurgeon for Game 2 Wednesday night. Spurgeon was called for cross-checking late in regulation on Buchnevich, taking his stick to his Achilles area. The NHL’s Player Safety Committee will review the play to see if Spurgeon should be subject to suspension.

The bottom line: The Wild needs to bounce back in a major way Wednesday night to avoid an early exit from the playoffs for the sixth straight time.

"To get a split going back to St. Louis is the goal now. Just stay with it and be positive like we’ve been all year," Foligno said.