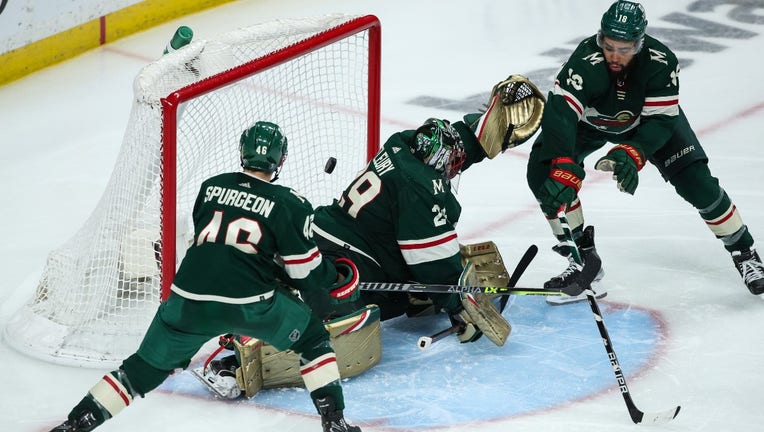 A shot by Vladimir Tarasenko of the St. Louis Blues gets past Marc-Andre Fleury #29 of the Minnesota Wild for Tarasenko's second of three goals in the third period for a hat trick in Game Five of the First Round of the 2022 Stanley Cup Playoffs at Xc ((Photo by David Berding/Getty Images))

MINNEAPOLIS - The Minnesota Wild heads to St. Louis for Game 6 on Thursday with its season on the line after a 5-2 loss to the Blues Tuesday night in front of more than 19,000 fans at Xcel Energy Center.

They left booing and angry after a third period meltdown that featured a natural hat trick by Vladimir Tarasenko to lift the Blues to the victory, and a 3-2 lead in the best-of-seven series. Tarasenko scored twice over an 88-second span in the opening 2:31 of the period, then added an empty-net goal late.

The Minnesota Wild faces elimination in St. Louis Thursday night after the Wild lost to the Blues 5-2 Tuesday at Xcel Energy Center and now trail in the series 3-2.

The loss spoiled another big night for Kirill Kaprizov, who made more history with a pair of first period power play goals. The Wild now needs a win in St. Louis Thursday night to force a decisive Game 7 in St. Paul on Saturday. The Wild/Blues winner advances to the Western Conference Semifinals to face the Colorado Avalanche.

"It doesn’t matter, right? This is gone. We have an opportunity to play another hockey game, and it has to be our best game. We have to get rid of the uncharacteristic mistakes that we had tonight and get the job done there. Come back here, that’s our focus," Evason said.

The Wild had a 2-1 lead after 20 minutes, thanks to Kaprizov. He set a Wild franchise record with his sixth and seventh goals of the series to pass both Marian Gaborik and Wes Walz, who each had five in a playoff series. Both goals for Kaprizov came on the man advantage, less than four minutes apart, after Ryan O’Reilly gave the Blues a 1-0 lead less than five minutes into the game on a St. Louis power play.

Kaprizov would rather have the win and a chance to win the series going into Game 6.

"Not great. The goal isn’t for a player to play well, the goal is for the team to play well and we didn’t win. Ultimately that’s what we play for," Kaprizov said through a translator. "We have a chance to make some changes to get the series back home for a Game 7, and that’s what we aim to do."

Kaprizov is also one of three active players to score at least nine goals in their first 12 playoff games. He joins Tarasenko, who had 10, and Jake Guentzel, who had nine.

"He’s unbelievable, right? He’s physical, the kid just keeps competing his ass off. He wants to win and just wills the team. He just didn’t have enough guys willing alongside him tonight. It’d be nice to have 20 of him, we’d be competing our butts off a little better," Evason said.

The Blues tied the game 2-2 at 15:28 of the second period. Brandon Saad redirected a wide angle shot from Jordan Kyrou past Marc-Andre Fleury. Then Tarasenko took over for the Blues in the third period. He scored at the 1:03 mark to give the Blues a 3-2 lead, moments after Ryan Hartman was hauled down without a whistle. Tarasenko scored his second of the night at 2:31 of the third period to make it 4-2, putting the Wild’s season on the brink of elimination. Tarasenko sealed the win with an empty-net goal with 1:32 to play.

After allowing two early goals, Binnington finished with 32 saves for the Blues. Marc-Andre Fleury made 31 saves, but would like to have the first two goals of the third period back.

"We liked our chance after two being tied. They pushed hard to create some chances. It happened and we’ve got to put it behind, forget it about it quickly and move on," Fleury said.

The Wild hasn’t made it past the first round of the Stanley Cup Playoffs since beating the Blues in 2015. They need a win Thursday to avoid another early playoff exit.

"You’ve got nothing to lose and we seem to like that position. It’s just one of those things where we got ourselves in this position and no one is going to be quitting on each other. We’re a very close group for a reason," Marcus Foligno said. "We’ve battled all season, and Game 6 is no different. Expect their best, that’s the mindset going in."

The Wild trailed the Vegas Golden Knights 3-1 in the playoffs last year before losing in seven games. They’ll need that desperation Thursday to earn a Game 7 on Saturday.

"We’ve seen our group respond and we’re expecting our group to respond. It’s a must-win, it’s desperation, we’ve got to play our best game," Evason said. "All the clichés that you want to throw out there, it’s one hockey game at a time and we’ll compete our butts off and see where we sit at the end of the night."