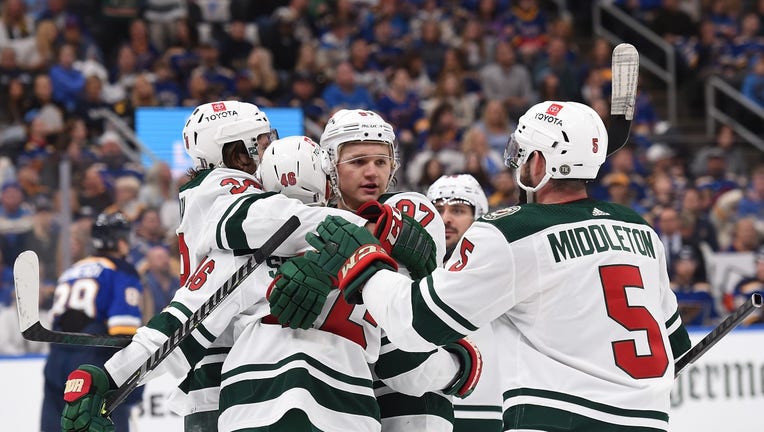 Kirill Kaprizov #97 of the Minnesota Wild is congratulated after scoring a goal against the St. Louis Blues in the first period of Game Four of the First Round of the 2022 Stanley Cup Playoffs at Enterprise Center on May 8, 2022 in St Louis, Missouri ((Photo by Joe Puetz/Getty Images))

MINNEAPOLIS - Missed opportunities, an 0-for-4 night on the power play and being in the penalty box early proved costly for the Minnesota Wild Sunday afternoon in the Stanley Cup Playoffs.

The St. Louis Blues got a 5-2 win in Game 4 over the Wild, evening the series at 2-2 with the two teams back at Xcel Energy Center Tuesday night. A big opportunity missed for the Wild, as they could’ve given themselves a chance to close out the series on their home ice with a win Sunday.

The vibe around the team hasn’t changed. It’s turned into a best-of-three series, and if it needs to go seven games, two of them are on the Wild’s home ice.

"We just have to focus on the next game now. That’s the playoffs. The vibe is it’s 2-2 and like we said earlier, it’s not going to be easy. It’s the playoffs, the Blues are a good team," center Freddy Gaudrau said after Sunday’s loss. "It’s just bring our mind back to the next game."

The Wild was fortunate to get out of the first period Sunday tied 1-1. They were out-shot 18-5, and had to kill off six minutes of penalties between Kevin Fiala and Joel Eriksson Ek. Fiala had a double-minor for high sticking, and Ek had another high-sticking infraction.

Fiala’s was a questionable call, as his stick was lifted by the St. Louis player and drew blood. The Wild has shown throughout the four games that they’re the better team when all five skaters are on the ice.

"We have to keep our sticks on the ice and we shouldn’t put ourselves in that position. It really disrupted our game. We have to get back to our game," Wild coach Dean Evason said Monday.

In perhaps the most interesting stat through four games, all of them have finished with at least three-goal margins. Playoff games are typically physical, tight-checking tilts with few chances. The Blues have wins of 4-0 and 5-2, the Wild have wins of 6-2 and 5-1.

One thing that has to change for the Wild is getting more out of their power play. They went 0-for-6 in Game 1, scored twice in Game 2 and were 0-for-4 in Game 5. For the series, the Wild is 2-for-17 through four games. That includes not scoring on a 5-on-3 advantage late in the second period Sunday, down 3-1 at the time.

It’s been a particularly frustrating series for Kevin Fiala, who has just one assist in four games after collecting 85 points in the regular season.

"It’s a new game, so we’re going to do everything we can to refocus, clear the mind and forget this game and take the positive for the best. New game, new chances," Fiala said.

So is Game 5 Tuesday a must-win on home ice? Technically, no. But it is if the Wild don’t want to head to St. Louis on Thursday facing elimination. A win Tuesday, and there’s a one-game buffer before a potential winner-take-all Game 7 at Xcel Energy Center. The Wild was one of the best home teams in the NHL in the regular season, at 31-8-2.

"We don’t think like that. We just think let’s compete, see where we sit at the end of the night. We’re preparing to compete tomorrow, we’re excited about the opportunity," Evason said. "The series is tied, we don’t look any further than the drop of the puck tomorrow."