MINNEAPOLIS - The wait to determine Kirill Kaprizov’s NHL future is over.

The Minnesota Wild announced on Tuesday they’ve signed Kaprizov to a five-year, $45 million deal that keeps him in Minnesota through the 2025-26 season. 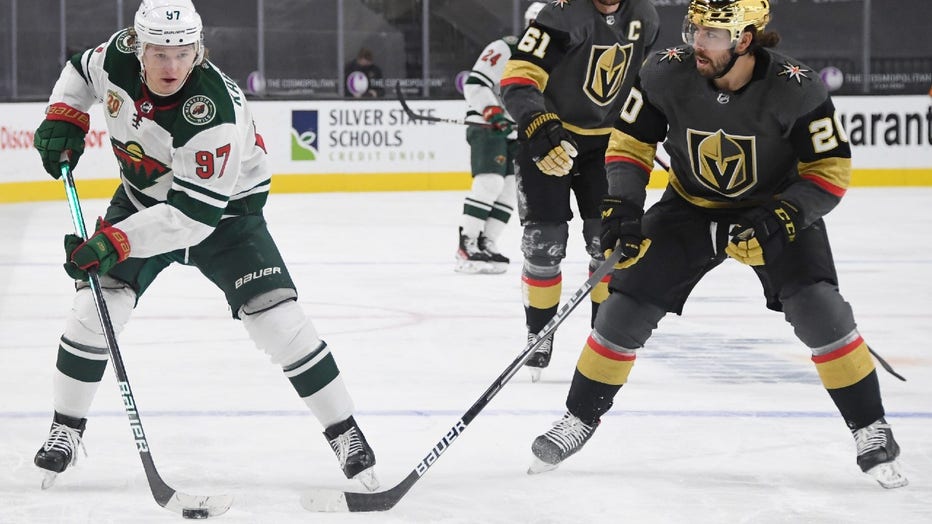 Kirill Kaprizov #97 of the Minnesota Wild skates with the puck against Chandler Stephenson #20 of the Vegas Golden Knights in the third period of their game at T-Mobile Arena on March 1, 2021 in Las Vegas, Nevada. The Golden Knights defeated the Wild ((Photo by Ethan Miller/Getty Images))

Kaprizov, 24, won the Calder Trophy last year after leading the Wild and NHL rookies with 51 points. His 27 goals in 55 regular season games were also a team-high. Kaprizov led NHL rookies in goals, even-strength goals, power-play goals and shots on goal. He was tied for first with two overtime goals, second in assists, even-strength points and power-play points.

He set franchise rookie records for goals, assists and points. Kaprizov also had two goals and an assist in the Stanley Cup Playoffs against the Vegas Golden Knights.

The move comes as the Wild open training camp on Thursday. It’s not clear if Kaprizov will be available, between obtaining a work visa to travel to the United States and having to quarantine due to COVID-19 protocols.