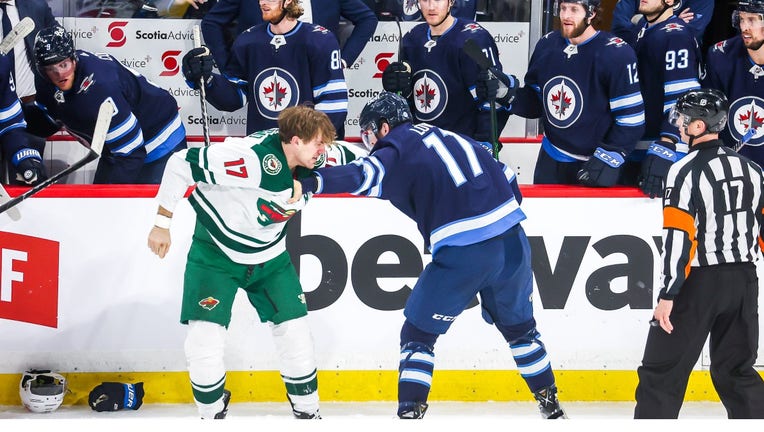 Adam Lowry #17 of the Winnipeg Jets engages in a fight against Marcus Foligno #17 of the Minnesota Wild during third period action at the Canada Life Centre on February 8, 2022 in Winnipeg, Manitoba, Canada. This would be the second fight of the nigh ((Photo by Jonathan Kozub/NHLI via Getty Images))

MINNEAPOLIS - The Minnesota Wild clinched a playoff spot Sunday night and are still battling for home ice in the postseason with seven regular season games to play.

For at least the next three, they’ll be without winger Marcus Foligno. The Wild announced Monday they’ve placed Foligno on the NHL’s COVID-19 Protocol List. Foligno will have to be out at least five days, which means he’ll miss Tuesday’s game at the Montreal Canadiens. He’ll also miss home games Thursday against the Vancouver Canucks, and Friday against the Seattle Kraken.

In 71 regular season games, Foligno has 39 points, including 22 goals.

To replace Foligno, the Wild has recalled Mitchell Chaffee from the Iowa Wild. Chaffee, 24, has 37 points, including 22 goals, in 45 games at Iowa this season. He also has eight power-play goals.

The Wild is currently in the No. 4 spot in the Western Conference at 101 points with seven games to play. They’re just behind the Calgary Flames, and one point behind the St. Louis Blues. They’re also third in the Central Division, behind the Blues and Colorado Avalanche.

The Wild is 27-7-2 at home this season, and plays five of its final seven regular season games at Xcel Energy Center.