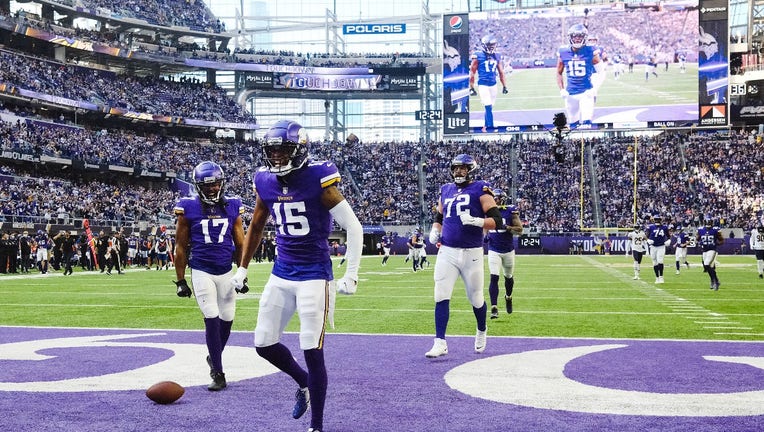 Ihmir Smith-Marsette #15 of the Minnesota Vikings celebrates his 44-yard touchdown over the Chicago Bears in the third quarter of the game at U.S. Bank Stadium on January 09, 2022 in Minneapolis, Minnesota.  ((Photo by Stephen Maturen/Getty Images))

MINNEAPOLIS - In a game that meant nothing for either team other than NFL Draft positioning, the Minnesota Vikings woke up in the second half for 28 points in a 31-17 win over the Chicago Bears on Sunday at U.S. Bank Stadium.

The 2021-22 season ends with the Vikings finishing 8-9, and missing the NFC Playoffs for the second straight season under Mike Zimmer. It’s also the third time in the last four seasons the Vikings won’t be in the postseason. Now, the wait is on to see if the Vikings’ ownership group opts to bring Zimmer and Rick Spielman back for 2022, or take the franchise in another direction after the latest disappointing finish.

The biggest questions remaining around the Minnesota Vikings after Sunday’s game going into the 2022 season revolve around the futures of head coach Mike Zimmer, general manager Rick Spielman and quarterback Kirk Cousins, who is due to make $45 million next season.

With Sunday's win, the Vikings avoided what would've been the first 10-loss season for Zimmer in Minnesota. Enough happened after the game to indicate Zimmer’s run might be over after eight seasons. He took a photo on the field with his son, Adam, and Andre Patterson, the team’s co-defensive coordinators.

Zimmer walked off the field waving to fans before going into tunnel, then walked back out to the field for an encore to take in U.S. Bank Stadium one final time. It might have been his last time on the turf as Minnesota’s head coach. His post game news conference felt more like a funeral, though he said he hasn’t heard from ownership about his future. That could change as early as Monday.

"I haven’t heard anything about my job status. It’s not my choice, it’s not my decision," Zimmer said.

He also didn’t feel much like reflecting on eight years with the Vikings. The time includes 72 wins, two playoff wins and two NFC North titles.

It also includes five years of missing the playoffs, which doesn’t sit well with those at the highest perch of the franchise.

After the win, Kirk Cousins, Anthony Barr and Justin Jefferson were all asked about Zimmer and if his uncertain future was a cloud hanging over the team.

Cousins: "We try to insulate ourselves as best as possible and kind of ignore the noise because we’ve got a job to do today and wanted to get the job done. I just think no matter what happens, it’s never one person. We all have a hand in success, we all have a hand in when we come up short."

Barr: "I love Coach Zim. I know he’s catching a lot of heat, but players play the game too. I think you can point the finger at us just as much as you can point it at him. He happens to be the fall guy I guess. It kind of is what it is, I don’t know that fans really appreciate him the past few years as players have. At the end of the day we just didn’t get it done and that’s all that matters."

Jefferson: "That’s something that I can’t control, I can only control myself, me going out there and playing my butt off. Let the upstairs work out all that. I like Coach Zimmer as a coach, as a person, it is what it is."

The second half looked more like the way the Vikings wanted to finish the season. Cousins connected with Ihmir Smith-Marsette, Jefferson and KJ Osborn for touchdowns, Patrick Peterson returned his first interception of the season 66 yards for a touchdown and the fans that were at U.S. Bank Stadium had something to cheer about.

Cousins finished 14-of-22 for 250 yards. Smith-Marsette had three catches for 103 yards, and Jefferson finished just 17 yards shy of breaking Randy Moss’s mark for receiving yards in a single season. He needed 124 yards, and finished with five catches for 107 yards. The game ended with the Vikings running the ball and taking a knee on their last two drives, to fans booing that Jefferson wasn't getting a chance to break Moss's record.

Zimmer, Cousins and Jefferson were all aware of the situation.

"We talked all week, I mentioned it at his locker this week that I’m aware of it. I didn’t want him to ever think that I’m not aware of it and that I want to help him the best I can. He understands as a professional that the win comes first," Cousins said. "We were close, he had a great game. Doesn’t take away from the fact that he had a great game and a great season."

Jefferson's best chance to break the record came on Osborn's touchdown. He broke open across the field late, but Cousins didn't see him before connecting with Osborn for 21 yards and a 24-17 Vikings' lead with 8:04 to play. Jefferson could've sulked, but instead celebrated the score with his teammate. Jefferson finishes the season with 1,616 receiving yards, 17 shy of history.

"Just being that close and not getting it, definitely tough. But it is what it is," Jefferson said.

The Vikings now head into an offseason of uncertainty, centering around their head coach and general manager. One thing the Vikings did do by winning Sunday, is hurt their positioning for the 2022 NFL Draft.

The Vikings went 6-8 in games this season decided by eight points or fewer. They were a few plays away from being a playoff team, and not talking about a potential coaching change.

"It’s unfortunate, I wish we could’ve eked out a couple more wins in those tight situations. At the end of the day we just didn’t get it done and that’s all that matters," Barr said.