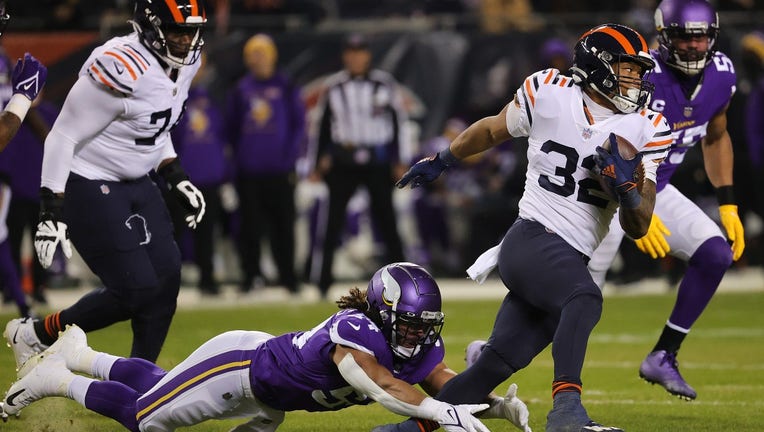 David Montgomery #32 of the Chicago Bears carries the ball during the first quarter against the Minnesota Vikings at Soldier Field on December 20, 2021 in Chicago, Illinois.  ((Photo by Jonathan Daniel/Getty Images))

MINNEAPOLIS - The Minnesota Vikings had their already slim NFC Playoff hopes dashed in a 37-10 loss to the Green Bay Packers at Lambeau Field Sunday night.

Less than 24 hours later, five starters have been placed on the reserve/COVID-19 list. The Vikings announced Monday that safety Cam Bynum, offensive linemen Ezra Cleveland, Christian Darrisaw and Brian O’Neill and linebacker Eric Kendricks were all placed on the COVID-19 list.

The Vikings were without Kirk Cousins Sunday night after he tested positive for COVID-19 late last week. Without Cousins, Sean Mannion threw for 189 yards and a touchdown, but the offense struggled with only 27 rushing yards, 206 total yards and 11 first downs.

That brings the number of Vikings players placed on the COVID-19 list up to 31, dating back to early October. With cases going up throughout the season, the NFL is in a constant mode of adjusting its testing and protocols to ensure it can finish a season and keep players as healthy as possible.

That doesn’t mean all the players liked the protocols, even if they were agreed to by the players’ association.

"I think the new rules were kind of sketchy as far as not being tested. It is what it is, all 32 teams have the same protocols. They say you are vaccinated, you have COVID, you don’t have to be tested, you can pass it along. You aren’t vaccinated, you have to be tested every day and you don’t put others at risk," safety Xavier Woods said Monday. "It was definitely a shocker when they made those new rules."

Woods is referring to new protocols the NFL put in place with the Omicron variant causing an increase in cases. Vaccinated players not showing symptoms can return after two negative tests 24 hours apart. Players not vaccinated can return after five days.

Mike Zimmer arrived to TCO Performance Center on Monday to get a text that five players, all who played in Sunday's loss, tested positive.

If all five are asymptomatic, they could return to the team after five days. That would be a difficult ask, with the Vikings hosting the Chicago Bears on Sunday to end the 2021-22 season for both teams.

"Nobody has the playbook to this stuff so the people that are making the rules, I’m sure they’re trying their best to follow the rules. It’s an evolving thing, but the people involved are trying their best," receiver KJ Osborn said. "No matter what people on the outside think, everybody has their own opinion. Some people want to get vaccinated, some people don’t want to be vaccinated, and that’s their own personal opinion. Win, lose or draw because of a vaccination, I don’t think that’s any reason to blame anyone. Everyone has their right and opinion to what they want to do."

The Vikings (7-9) were eliminated from the NFC Playoffs for the second straight season, the first time that’s happened under Mike Zimmer. It’s also three times in the last four years they won’t be in the playoffs, and five of Zimmer’s eight seasons.