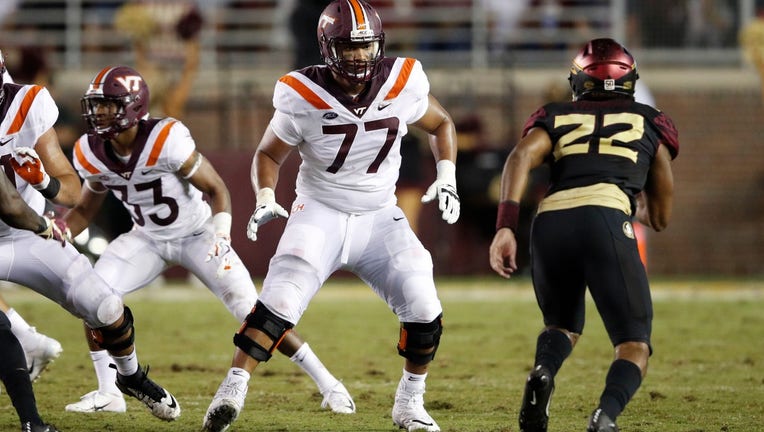 Christian Darrisaw #77 of the Virginia Tech Hokies in action during the game against the Florida State Seminoles at Doak Campbell Stadium on September 3, 2018 in Tallahassee, Florida. Virginia Tech won 24-3. ((Photo by Joe Robbins/Getty Images))

MINNEAPOLIS - It came a little later than they expected, but the Minnesota Vikings added one of the top offensive linemen in the 2021 class in the NFL Draft Thursday night.

The Vikings entered the night with the No. 14 overall pick, but traded it to the New York Jets along with a fourth-round draft choice. In return, Minnesota got the No. 23 overall pick, and the 66th and 86th picks in the third round. With the 23rd pick, the Vikings selected Virginia Tech offensive lineman Christian Darrisaw.

The Virginia native was with family and friends when his lifelong dream became reality.

"That moment was surreal. Growing up as a kid and just watching the NFL Draft and knowing one percent of high school or college kids make it to this level, you’ve got to be the odds for sure. Just knowing I beat them and to be drafted in the first round was a dream come true," Darrisaw said.

The Vikings thought about taking Darrisaw at No. 14 before moving down to accumulate more draft capital.

"If we were considering a guy at 14 and still got him (at 23), that was a great night for us," Vikings General Manager Rick Spielman said from TCO Performance Center Thursday night.

He made 12 starts in his first season with the Hokies as a true freshman, and made 13 starts as a sophomore. After his junior season, Darrisaw was considered one of the top offensive tackles in the country, earning First Team All-ACC and Second Team All-America honors.

Darrisaw will get the chance to compete for a starting offensive line job along Garrett Bradbury, Brian O'Neill, Ezra Cleveland and Dakota Dozier. The Vikings had a hole to fill on the offensive line after Riley Reiff's departure in the offseason.

"He’ll be at left tackle. But he’s got to come in and compete and win the job just like everyone else. We’ll be able to keep O’Neill at right and go from there," Vikings coach Mike Zimmer said Thursday night.

The Vikings now have four picks in the third round, and three picks in the fourth round that Spielman can use to move around in the draft on Friday.

"We have more than enough ammunition to move up into the second round," Spielman said.

With the No. 14 pick, the Jets took USC offensive lineman Alijah Vera-Tucker, who had been linked to the Vikings as a possible choice. Offensive lineman Penie Sewell went to the Lions at No. 7, the Chicago Bears traded up to take Ohio State quarterback Justin Fields and one pick in front of the Vikings, the L.A. Chargers took Northwestern offensive lineman Rashawn Slater.

Darrisaw will get his chance to earn a starting job with the Vikings, but for one night, he'll celebrate his NFL dream coming to life.

"Surreal moment for sure, I’m just so grateful to be with the Minnesota Vikings and I can’t wait to get to work with all my teammates and coaches," Darrisaw said.