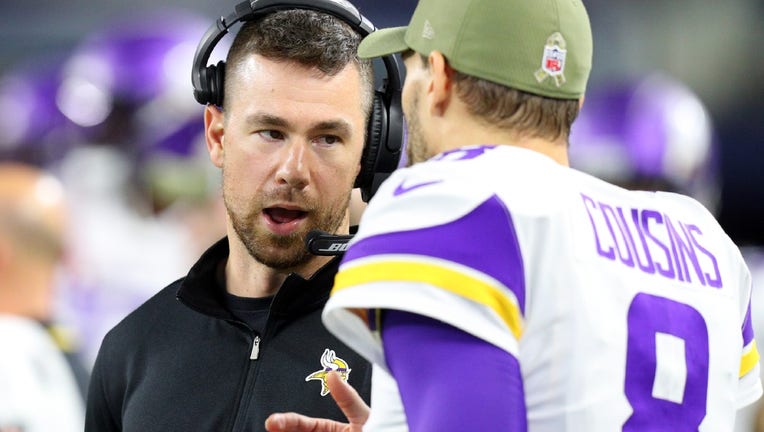 Minnesota Vikings quarterbacks coach Klint Kubiak talks to Kirk Cousins #8 during a game against the Dallas Cowboys at AT&T Stadium on November 10, 2019 in Arlington, Texas. ((Photo by Richard Rodriguez/Getty Images))

MINNEAPOLIS - The Minnesota Vikings announced Tuesday that Klint Kubiak has been named the offensive coordinator for the 2021 season.

Klint Kubiak replaces his father, Gary Kubiak, who was the Vikings’ offensive coordinator last season after coming to the team two years ago as an offensive advisor and assistant head coach to Mike Zimmer. Gary Kubiak retired in January after 25 seasons of coaching in the NFL.

For the first time in his coaching career, Klint Kubiak will call plays for an NFL offense. But the principles they've used the last two seasons will largely stay the same. Kubiak has had the last two years to learn from his father, and be ready for his moment.

"Definitely learned through osmosis just being around him. The main thing that comes to mind is just treating people with respect and being organized. Being demanding and being fair. Everything else will take care of itself," Klint told reporters Tueday via Zoom.

Klint Kubiak came to the Vikings in 2013 as a quality control coach and offensive assistant. He’s been the quarterbacks coach for Kirk Cousins the last two seasons, and will be the team’s sixth new offensive coordinator in the last six seasons. In 2019, Cousins threw for 26 touchdowns and just six interceptions.

"I am thrilled for Klint to get the opportunity to be our offensive coordinator. Having the chance to work with him on a day-to-day to basis the last two seasons has helped me grow both as a player and a person. His sharp mind and even-keel demeanor will serve him well as a play-caller. We will all benefit from the continuity Klint provides, and I’m looking forward to working with him in this new role," Cousins said Tuesday in a statement.

Zimmer has preached continuity and consistency among the offensive coaching staff the last several seasons. It's one of the main reasons why, despite a search that included outside interviews, that Klint Kubiak had the inside track from the start. He will turn 34 next week.

"I’m happy to keep consistency of the scheme and the staff on the offensive side of the ball for 2021. I believe in the system and the coaches we have. Klint will do a great job leading them and continuing to put our players in position to maximize their skills," Zimmer said Tuesday in a statement released by the Vikings.

Gary Kubiak replaced Kevin Stefanski, who left in the offseason to be the Cleveland Browns’ head coach. With Gary Kubiak in charge, the Vikings finished No. 4 in total offense in the NFL. Cousins threw for a career-high 35 touchdowns, Dalvin Cook finished second in the NFL in rushing and led the league in total yards from scrimmage. Justin Jefferson set rookie records for catches (88) and receiving yards (1,400), and was selected to the Pro Bowl along with Cook.

It's now Klint's job to make sure the offense takes another step in 2021.

"Rick Spielman and Zim have identified so many great players that we have here on offense, and we have to do our best to utilize the talents of everybody. Dalvin’s success opens up holes for Justin and Adam, offensive line blocking their tail off helps us in the play-pass game. It’s a team effort," Klint said. "If we don’t evolve, then we’ll be left in the dust. That’s every team in the NFL."