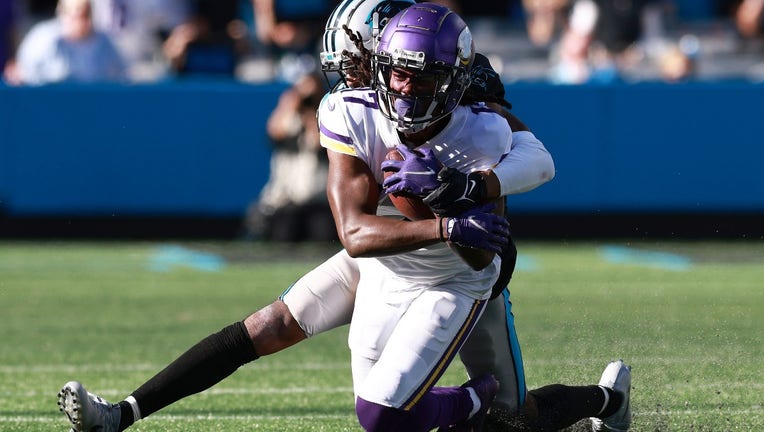 Keith Taylor Jr. #28 of the Carolina Panthers tackles K.J. Osborn #17 of the Minnesota Vikings during overtime in a game at Bank of America Stadium on October 17, 2021 in Charlotte, North Carolina.  ((Photo by Grant Halverson/Getty Images))

MINNEAPOLIS - It was more dramatic than it probably needed to be, but the Minnesota Vikings beat the Carolina Panthers 34-28 in overtime on Sunday. The Vikings head to their bye week 3-3, and after getting out to a 1-3 start, getting the feeling that the season was at an early crossroads.

Kirk Cousins hit KJ Osborn, who won the No. 3 receiver competition in training camp, for a 27-yard game-winning touchdown 5 minutes, 48 seconds into overtime. Osborn, who also made a grab for a key third down conversion earlier on the drive, made the catch near the goal line and won the race to the pylon for the walk-off win. He ripped off his helmet in celebration, and his teammates mobbed him.

Osborn said after the game he took his helmet off as a nod to Stefon Diggs, who did the same after the "Minneapolis Miracle." Osborn also kept the ball from the play, and didn't let go postgame.

After a thrilling overtime win against the Carolina Panther, Minnesota Vikings coach Mike Zimmer reacted to the game during postgame interviews.

"It was my turn to make a play so that's what I did," said Osborn, who finished with six catches for 78 yards and the biggest score of the game.

That's after the Panthers drove 96 yards in 87 seconds, tying the game with a touchdown and two-point conversion after having difficulty on offense most of the game. After losses in three of their first four games to start the season, the Vikings are .500 with a much-needed week off ahead.

"We’re 3-3, I mean could we be better? Yeah. Could we be worse? Yeah. We are where we are, but I like the resiliency of this team. They fight," Vikings coach Mike Zimmer said after the win. "I felt like there were so many times we should’ve put the game away today, and we didn’t do that. When we get to the point where we’ve got a team down, we’ve got to put them away. That’s something we’ll keep trying to fix."

The Vikings finished with 571 yards of total offense, yet had to rally for the win after the Panthers scored 11 points in the final five minutes to force overtime. Carolina took its first lead of the second half after blocking a Vikings’ punt, which Kenny Robinson scooped up and took in for a touchdown. It gave the Panthers a 17-12 lead, and it was their first blocked punt for a score since September of 1998.

Kirk Cousins has been playing like a Pro Bowler

For all the criticism he gets, quarterback Kirk Cousins has left it all on the field this season, including on Sunday when he threw for 373 yards and 3 touchdowns against a tough Panthers defenses.

Minnesota answered with 16 straight points on a 16-yard touchdown run from Cook, a 5-yard touchdown catch from Thielen and Greg Joseph’s 38-yard field goal with 10:12 to play.

Zane Gonzalez made a 23-yard field goal with 4:41 to play to get the Panthers within 28-20. They got the ball back after a Vikings’ punt. The Panthers got two fourth down conversions before Sam Darnold hit Robby Anderson for a 7-yard touchdown to get within 28-26. Darnold then flipped it to Tommy Tremble for a two-point conversion, and the two teams were tied 28-28 with 41 seconds to play.

Cousins led the Vikings’ offense back down the field before the end of regulation, but Joseph missed wide right from 47 yards out to force overtime. It was his second miss of the fourth quarter, and it set up the heroics for Cousins and Osborn. The Vikings came into Sunday’s game having not scored an offensive touchdown in the second half since Week 1. They got three against the Panthers between Cook, Thielen and Osborn.

"He’s just continued to be a tremendous player for us. I’m just happy that it’s now showing up in games. Can’t say enough about the contributions he’s made for our offense," Cousins said of Osborn.

Defensively, Bashaud Breeland intercepted Darnold on his first throw of the game. Armon Watts got a strip sack fumble that Dalvin Tomlinson recovered, and the Vikings sacked Darnold four times. Of biggest concern is Patrick Peterson, who injured his right leg late in regulation and did not return. He limped to the sideline grabbing his hamstring, but team officials said he was dealing with cramps.

Darnold finished just 17-of-41 passing for 209 yards after going 5-for-18 for 60 yards in the first half, and had a 55.6 rating as the Vikings forced three turnovers. The Panthers did just enough to stay close in the end, largely due to 11 Vikings' penalties for 98 yards.

It’s never easy for the Vikings, but the bottom line is they’re 3-3 and get a much-needed week off before a four-game stretch against the Cowboys, at the Ravens, at the Chargers and home against the Packers that could define the rest of the season.

It's the Vikings' second walk-off win, and the fifth game in six weeks that's come down to the final possession.

"I'm worn out," Zimmer said before leaving the podium.