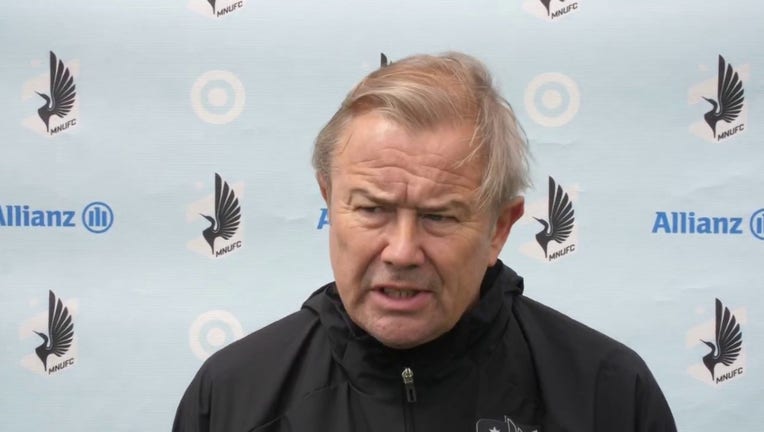 Minnesota United coach Adrian Heath talks about the team's 0-3 start as the Loons head to Colorado Rapids on Saturday.

MINNEAPOLIS - It wasn’t the start Minnesota United had in mind.

Not after reaching the semifinals of last year’s MLS is Back Tournament last summer. Not after winning their first home playoff game at Allianz Field, and being one game way from playing for the MLB Cup last year.

The Loons head to Colorado Rapids on Saturday, looking for both their first points and win of the season. They’re 0-3 with regulation losses to Seattle Sounders, Real Salt Lake and Austin FC. There’s plenty of season left, so they’re not panicking.

At least not yet.

"Try to keep the belief within the group, believe in what we’re doing, believe in what we’ve done over the last two years is right and hopefully catch a break. We know there’s nobody coming with a magic wand," Minnesota United coach Adrian Heath said. "We’ve got to keep working hard on the training field, try and identify what we think is going wrong and try to rectify that."

The Loons are 0-3 and have been out-scored 7-1 in the process. Robin Lod has the lone goal this season, and it came in the home opener, a 2-1 loss to Real Salt Lake.

Midfielder Hassani Dotson says it comes down to putting in the effort to create their own luck. They also have to leave that 0-3 start where it is, in the past.

"We’re disappointed with the results, but we have to focus on the next one and try not to let the past negative feelings affect us, next opportunity to get our first points and hopefully our first win of the season," Dotson said. "The results aren’t just going to find its way, we have to make it happen ourselves."

One bright spot? A hometown player nearly got his first MLS goal on Saturday. Patrick Weah, a standout with Minnesota United’s youth academy and a Wayzata prep star, made his MLS debut in the 1-0 loss to Austin FC. He nearly got a header for a goal, but was just grateful for the opportunity to see the field.

"It was a dream come true. My whole life I’ve been working on that, visualizing and stuff and just waiting for that moment to come. Coach took a chance on me and put me in. It was a great moment for me and my family," Weah said.

The Loons head to Colorado on Saturday, still in search of their first points and win of the season. Heath says their ball movement has been good, but they need to be better in both creating their own scoring chances and limiting their opponent’s.

"Obviously there’s certain parts of our game that we’re not happy about. We’re disappointed and we know that we have to do better. That’s what we’re trying to do," Heath said.