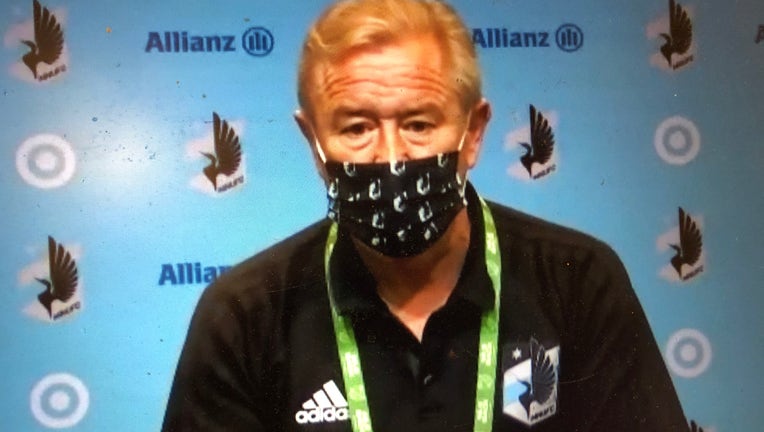 MINNEAPOLIS - The anticipation is mounting while the uncertainty also builds as Minnesota United prepares for its first match in four months Sunday night.

The Loons will take the pitch at 7 p.m. against Sporting Kansas City in their first game of the “MLS is Back Tournament” at ESPN’s Wide World of Sports in Orlando, Fla. It’s the first of three guaranteed games in group stage play, where they’ll have to be one of the top two teams in Group D or one of the three-best third-place teams to advance.

Minnesota United has held individual training, small-group workouts and full-team training. They’ve passed every Covid-19 test and followed all protocols. Their only scrimmage against the Columbus Crew was canceled after a Columbus player had a positive test. Heath can’t honestly say what he expects at kickoff Sunday night.

“No matter what we do training-wise, it’s very, very difficult to replicate what the game gives you. Until we actually start the game, we’re never 100 percent certain of where we are in our physical situation,” Loons coach Adrian Heath said Friday. “It’s been four months since this group played, that’s a long time not to be playing futbol. Until we have that game Sunday, I can’t honestly tell you how I think we’re going to be.”

There’s also still some question as to whether the game will even be played. FC Dallas and Nashville both had to leave the tournament due to multiple positive Covid-19 tests. Minnesota’s opponent on Sunday, Sporting KC, has had at least one recent positive test.

For now, the game is on as scheduled.

“I’m sure they’re doing everything to keep everybody safe. That’s ultimately what we’re here for, we want to play futbol,” Heath said.

Minnesota United will try its hardest to find what it had early in the season. The Loons couldn’t have gotten off to a better start, with two road wins before the Covid-19 pandemic forced the MLS suspended play with Minnesota United prepared to start a four-game home stand.

Midfielder Ethan Finlay says it will be a relief to take the pitch Sunday night, especially against an opponent. “Guys are ready to compete against a different face and a different jersey at this point. We’re excited for this tournament, we come here with intentions to compete at a high level,” Finlay said.

The Loons will be without top defender Ike Opara, who opted to stay in Minnesota due to a pre-existing health condition that he doesn’t want to put at risk. The team could, however, have the services of defender Romaine Metanire, who signed a multi-year deal with Minnesota United this week. He represented the Loons at the MLS All-Star Game last year.

The challenge for Heath and the Loons in Orlando is to find the intensity they had early in the season that led to a 2-0 start, and eight goals in those two games. Minnesota United is guaranteed three games, and their future in the tournament depends on their performance in those three games.

The Loons are one of three teams in their group, including Sporting KC and Colorado Rapids, to all start 2-0.

So what’s Heath’s message to his squad heading into Sunday night? Be ready.

“Can we be ready for the battle? Because I know it’s coming. We’re playing against a really informed Kansas City team, I know it’s going to be really, really tough. The question mark for us is can we maintain the level of performance that we’ve done in the first two games having had this four-month layoff? I don’t know the answer to that and I won’t know until probably after the game on Sunday,” Heath said. “Certainly we know that we’re going to have to come out and be ready to play from the very first minute, because I know they will be.”