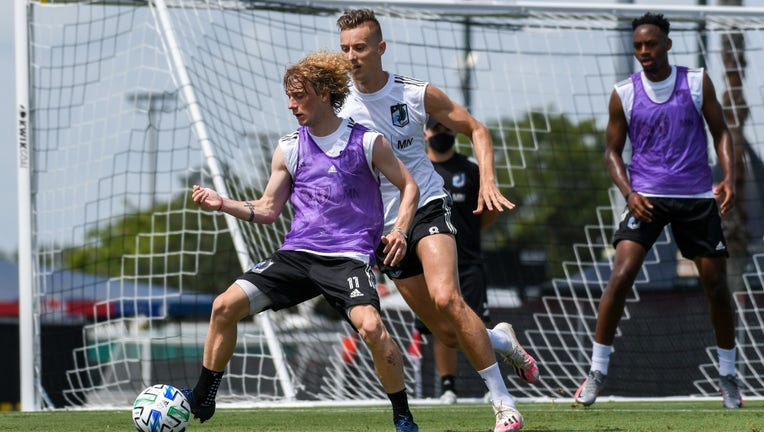 Minnesota United held full team training in Florida Tuesday morning as it prepares for the MLS is Back Tournament, which starts July 12 for the Loons against Sporting Kansas City. ((credit: Minnesota United))

MINNEAPOLIS - Minnesota United was set to face an opponent for first time in nearly four months Sunday night, but the Covid-19 global pandemic had other ideas.

The Loons had planned to play the Columbus Crew in a friendly before the "MLS is Back Tournament," but team officials say the match was canceled due to “over-abundance of caution” after a Columbus player tested positive for Covid-19 last Thursday. That player was put in self-isolation away from the rest of the team after the positive test.

It would’ve been Minnesota United’s only test against another opponent before starting the “MLS is Back Tournament” next weekend at ESPN’s Wide World of Sports in Orlando. Instead, the Loons held an inter squad scrimmage Sunday night.

They couldn’t play the traditional 11-on-11, but they made the most of what they had.

“This was probably our hardest day today, we played in game-like conditions for the best part of 70 minutes. Guys looked terrific, you can’t fault the work ethic and the commitment to try to do what we ask of them,” Loons coach Adrian Heath said. “Obviously it’s been a different week, but overall I’ve got a positive feeling about the group with the week that we’ve had down here.”

Minnesota United has now been in Orlando for a week, and their biggest adjustment has been playing in consistent heat and humidity. That’s despite holding team training early in the morning or at night.

“We know that and Adrian tells us before every session that every single team is going through the same thing. We’ve just kind of got to get on with it. We’ve just been working hard trying to get acclimated to the weather and to the training time and the game times,” forward Mason Toye.

Minnesota United was 2-0 and preparing for a four-game home stand when Major League Soccer suspended the season on March 12 due to the Covid-19 pandemic. Returning to the pitch has been a slow and cautious process, with players first returning for individual workouts on their own fields at the National Sports Center in Blaine.

The Loons eventually expanded to small-group sessions, before holding their first full team training at Allianz Field before flying to Orlando.

Based on the intensity in Sunday night’s scrimmage, Minnesota United is ready for an opponent.

“We looked pretty sharp tonight. Just everybody in terms of intensity and just desire to win, it was really awesome,” Toye said. “I think everybody is just itching to get away from everything, get away from each other and play against a different team and a different color. We’re really excited about that and just itching to get to the first game.”