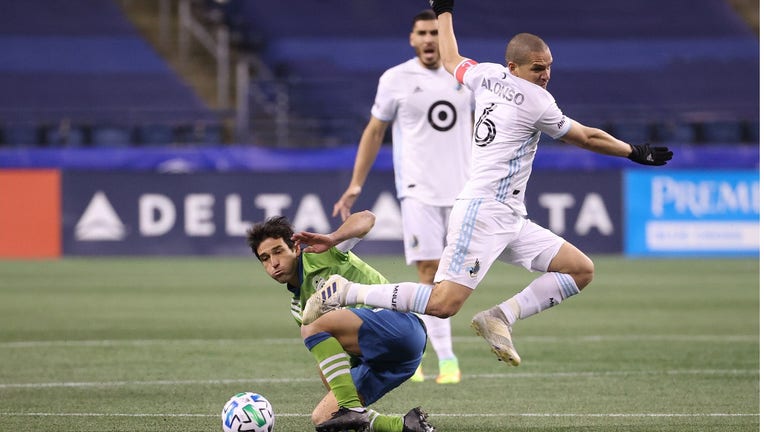 Nicolas Lodeiro #10 of Seattle Sounders and Osvaldo Alonso #6 of Minnesota United collide in the first half during their Western Conference Finals game at Lumen Field on December 07, 2020 in Seattle, Washington. ((Photo by Abbie Parr/Getty Images))

MINNEAPOLIS - Minnesota United is likely to have a different look with several new faces on the 2021 roster, but the club announced on Saturday the return of a veteran.

The Loons announced they’ve agreed to a new contract with midfielder and captain Ozzie Alonso. He’s a four-time Major League Soccer All-Star and has been with Minnesota United the past two seasons.

"We’ve managed to retain a player who I believe has been the best in his position for the last 10 years in MLS," Loons’ coach Adrian Heath said. "You look at the makeup of the player and it’s more than just his ability, there’s been loads of players with ability that fall by the wayside and never had a career. Ozzie has maximized everything that he has ever had: His talent, his personality, his leadership qualities and his professionalism. It’s more than just his football, everyone knows how good he is on the field. You can’t have enough people in your organization like him."

Alonso scored the first Minnesota United goal at Allianz Field, and helped lead the Loons to the finals of the 2019 U.S. Open Cup Final. He was also a key piece of the team’s run to the MLS is Back Tournament semifinals, and last year’s run to the Western Conference finals.

"Happy to be here with the team and have the opportunity to connect with everyone again. Last year was a great season for us but we know this year we have to be better and we’re focused on that," Alonso said after the Loons held full team training on Monday at the National Sports Center.

Alonso came to Minnesota United after 10 seasons with Seattle Sounders FC. The Loons were slated to start MLS presason training on Monday, but the team got back into town and quarantined early enough to have full team training on March 1, a week ahead of schedule.