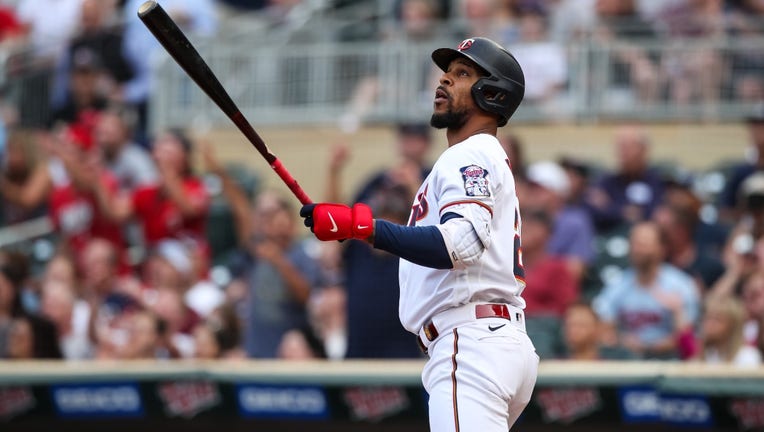 Byron Buxton #25 of the Minnesota Twins watches his solo home run, the second of three solo home runs in a row in the first inning of the game against the New York Yankees at Target Field on June 9, 2022 in Minneapolis, Minnesota.  ((Photo by David Berding/Getty Images))

MINNEAPOLIS - The Minnesota Twins hit five home runs off Gerrit Cole, including three in his first eight pitches, and got the star pitcher out of the game after less than three innings Thursday night. It wasn’t enough in a 10-7 loss to the New York Yankees on a perfect night for baseball in front of more than 26,000 fans at Target Field.

Series wins have been hard to come by for the Twins against the Yankees. They haven't gotten one since 2018, and let one slip away Thursday. The Twins had 3-1 and 7-3 leads in the game, but they Yankees made sure they wouldn't last.

"I think we definitely should've won that game," Twins manager Rocco Baldelli said after the loss.

The Yankees hit four homers of their own, two from Joey Gallo, taking advantage of Twins’ relief pitching and two costly errors. It spoiled a big night for Byron Buxton, who homered twice and drove in four. The Twins started the night with three straight homers off Cole from Luis Arraez, Buxton and Carlos Correa. The long balls went a combined 1,231 feet in Cole’s first eight pitches. It’s the first time the Twins have started a game with three straight homers since April 28, 2021, when Buxton, Josh Donaldson and Nelson Cruz did so at Cleveland.

Cole threw 70 pitches in 2 1/3 innings in his worst start of the season, exiting to a standing ovation from Twins fans. But the Twins didn’t get the payoff of a victory.

"I was really happy with the way we came out playing a really good team, maybe one of the best teams in baseball. We think we’re right there too. We went right at them, went after one of the best starters in baseball and hit him around pretty good," Baldelli said. "Couldn’t have been happier with the at-bats that we had."

Buxton, who was in an 0-for-30 slump at one point this season, had both of his hits leave the yard Thursday. His three-run blast to left in the second inning gave the Twins a 6-3 lead. It’s the second time this season Buxton has homered twice in each of the first two innings of a game. The only other Minnesota player to do that? Harmon Killebrew in 1969.

Buxton now has 14 homers on the season, and 14 hits in his last 42 at-bats. Trevor Larnach added a solo blast to right center off Cole in the third to give the Twins a 7-3 lead.

The Twins gave up the lead in the sixth. Gleybor Torres reached on an infield pop-up that fell between Correa and Jorge Polanco. The next batter, Aaron Hicks, sent a two-run blast to the plaza in right field off Joe Smith to tie the game 7-7.

"We dropped a pop-up. We gotta play crisper baseball if we’re going to get outs in the middle of the game and late in the game and make it happen," Baldelli said. "It’s what happens after a play like that. How do you stay in control and realize that’s still our ballgame to win? We still absolutely are in control of what ends up happening. We know what we have to do."

The Yankees took the lead in the seventh. Aaron Judge just missed a lead-off homer, settling for a double, and scored on Anthony Rizzo’s single to left. Hicks singled to left after a Polanco throwing error, scoring Donaldson, to give the Yankees a 9-7 lead. The Twins’ bullpen of Cotton, Smith, Jhoan Duran and Jovani Moran combined to give up six earned runs on nine hits over four innings.

Rizzo scored on a Moran wild pitch in the eighth to give the Yankees a 10-7 lead.

The Twins appeared ready to make a statement with early offense in what could’ve been their first series win over the Yankees in four years. Instead, the bullpen faltered and the Yankees, who finished with 14 hits, capitalized on a pair of Twins’ defensive miscues.

The Twins went 3-3 against the Toronto Blue Jays and Yankees, and now have a three-game weekend home stand against the Tampa Bay Rays. The Twins now have a 3.5-game lead in the AL Central after Cleveland beat Oakland 8-4 Thursday night.