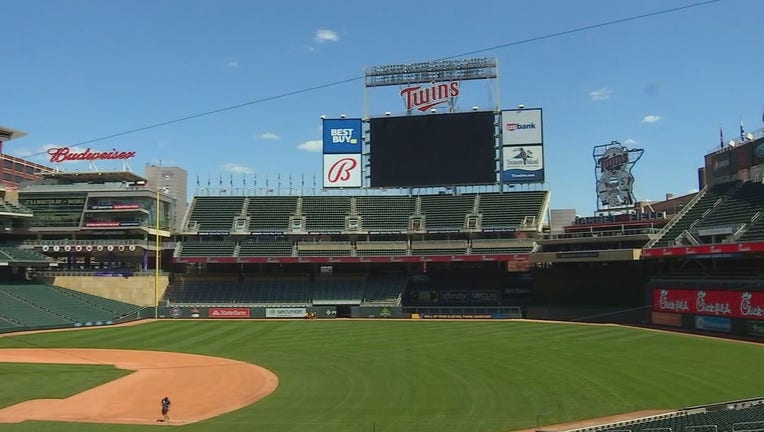 MINNEAPOLIS - The St. Paul Saints announced on Monday that for the first time in nearly two years, they can have a capacity crowd at CHS Field Tuesday as they host the Omaha Storm Chasers.

After losing the 2020 season to the COVID-19 pandemic, and having 50 percent capacity to start the 2021 season, the Saints can now sell all 7,210 seats at their still very new facility. Other Minnesota sports teams are right there with them in ramping up fan attendance.

The Minnesota Twins started the 2021 season with up to 10,000 fans at Target Field, which is about 25 percent capacity for the outdoor ballpark. Team officials announced Tuesday that with the Twins starting a six-game home stand against the New York Yankees and Houston Astros, they’re opening up to 80 percent capacity at Target Field. That means they’ll have about 31,600 seats for sale for all six games.

The Twins also say they’ll open up to full capacity at Target Field starting in July with COVID-19 restrictions being lifted this summer.

There are still some COVID-19 guidelines in place. Fans are encouraged, but not required, to wear face coverings while at indoor and outdoor locations in the ballpark. There are no physical distancing requirements, where previously fans had to sit in socially-distanced pods of two or four seats. Outside food, except for sunflower seeds, is allowed at Target Field.

MINNESOTA UNITED INCREASING TO NEAR FULL CAPACITY BY JUNE 23

For the first time since the 2019 season, Minnesota United is expecting a near capacity crowd when it hosts Austin FC on June 23 at Allianz Field. The Loons, which can hold 19,400 fans at their new facility, started the 2021 season at about 25 percent capacity.

Minnesota United sold out a majority of its 2019 home games, then was set to host their first home stand of the 2020 season 14 months ago when Major League Soccer suspended its season due to the COVID-19 pandemic.

The Loons on Wednesday will release tickets for their next seven home games, starting with the June 23 match against Austin, which is also Pride Night at Allianz Field. Minnesota United is also hosting their Salute to Freedom, July 3 against the San Jose Earthquakes.