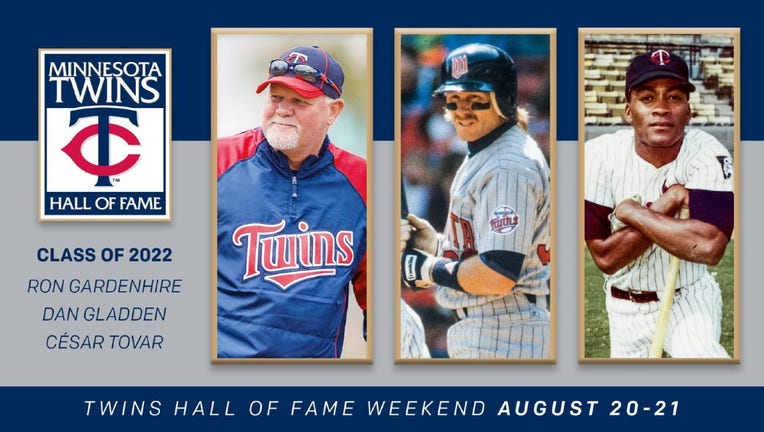 The Minnesota Twins announced Thursday that Ron Gardenhire, Dan Gladden and Cesar Tovar have been elected to the team's Hall of Fame 2022 class. ((credit: Minnesota Twins))

MINNEAPOLIS - The Minnesota Twins announced Thursday morning that Ron Gardenhire, Dan Gladden and Cesar Tovar have been elected to the team’s Hall of Fame for the 2022 class.

Gardenhire, Gladden and Tovar will be honored as the 35th, 36th and 37th members of the Twins Hall of Fame at induction ceremonies Aug. 20-21 at Target Field in a weekend series against the Texas Rangers. It’s the team’s first Hall of Fame class of at least three members since 2000, when it was the inaugural class of Harmon Killebrew, Rod Carew, Tony Oliva, Kent Hrbek, Kirby Puckett and Calvin Griffith. Most recently, Justin Morneau was elected in 2020, and inducted last summer.

The Minnesota Twins announced Thursday morning that Ron Gardenhire, Dan Gladden and Cesar Tovar have been elected to the team’s Hall of Fame for the 2022 class.

"The Minnesota Twins are thrilled about the election of Ron Gardenhire, Dan Gladden and César Tovar to the Twins Hall of Fame," club President & CEO Dave St. Peter said in a statement. "All three are most deserving of this honor and their impact – from the dugout to the broadcast booth and beyond – in the Twins organization and across Twins Territory has been felt for generations."

Gardenhire managed the Twins for 13 seasons, from 2002-14, and is No. 2 in franchise history behind Tom Kelly with 1,068 wins. Gardenhire was also a third base coach for 11 seasons, including the 1991 World Series title team. He was named American League Manager of the Year in 2010, and led the Twins to six AL Central titles.

"It’s a big day. A lot of excitement around my family, my friends and Twins’ country with Dan Gladden going in, can’t get any better than that. My first year coming into the game with the Twins coaching third base, and we win the World Series with me standing right next to that guy on third base, telling him to tag up, so there you have it," Gardenhire told reporters on Thursday via Zoom. "This hall of fame stuff, it’s unbelievable. This organization gave me a chance, TK (Tom Kelly) gave me a chance and we kind of went from there. I just want people to understand how much I appreciate what the Twins did for me and the career that they gave me, and it was unwavering. People had my back all the time."

"To be voted into the Twins’ Hall of Fame, a special fraternity and I’m honored to be able to finally go in and join that. I always hear players talk about that phone call from Rod Carew," Gladden said. "I got to experience it, it’s heart felt. He’s one of the guys you liked to emulate in the back yard playing whiffle ball. To get a phone call, you’ve got to cherish that and really appreciate that phone call."

Tovar became the second player in AL/NL history to play all nine positions in a game, doing so in September of 1968 in a 2-1 win over Oakland.

The three will be inducted less than a month after Jim Kaat and Tony Oliva will be inducted to the National Baseball Hall of Fame. Kaat will also have his No. 36 Twins’ jersey retired in July.