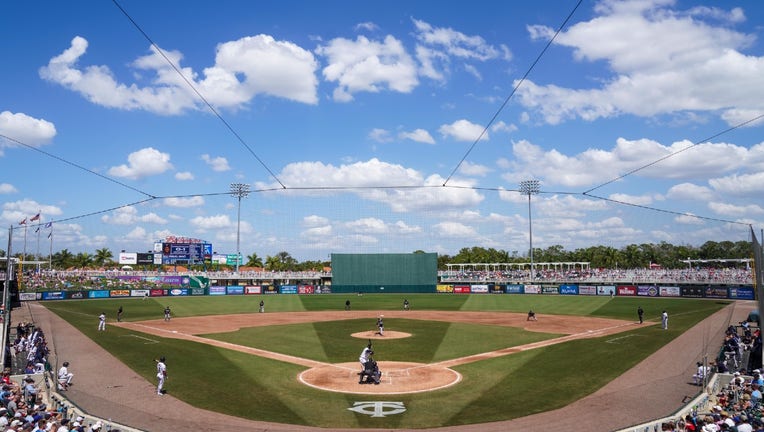 A general view of Hammond Stadium prior to a spring training game between the Atlanta Braves and Minnesota Twins on March 11, 2020 in Fort Myers, Florida.  ((Photo by Brace Hemmelgarn/Minnesota Twins/Getty Images))

MINNEAPOLIS - The Minnesota Twins on Tuesday announced their home Spring Training schedule for the 2023 season at Hammond Stadium in Fort Myers, Fla.

The wins will have 17 home games, and single-game tickets for Spring Training will go on sale starting Thursday, Jan. 12. The Twins’ spring schedule will include 33 total games, which includes a March 9 game against the Dominican Republic team from the World Baseball Classic.

The Twins will open their Grapefruit League schedule on Feb. 25 with a split-squad game, a day that includes a game against the Tampa Bay Rays. They’ll have three home dates against the Rays and Atlanta Braves, two against the Boston Red Sox, Baltimore Orioles and Pittsburgh Pirates and single games against the Philadelphia Phillies, Detroit Tigers, New York Yankees and Toronto Blue Jays.

The Twins reportedly made their first free agent move Monday night, and it didn’t involve shortstop Carlos Correa. The Twins are signing catcher Christian Vazquez to a three-year deal reportedly worth about $30 million.

Starting catcher Ryan Jeffers missed most of last season with an injury, and Gary Sanchez is a free agent. Vazquez spent his first seven-plus seasons with the Boston Red Sox, winning a World Series in 2018, before being traded to the Houston Astros last season.

He hit .276 with 23 homers and 72 RBI in 2019. Last year, he hit .282 with eight homers in 84 games with the Red Sox before moving to the Astros. He was considered one of the top catchers in free agency, behind Wilson Contreras.

The Twins still have to figure out if they’re going to bring Correa back, and address pitching before the 2023 season. The Twins finished 78-84 last season, finishing third in the American League Central Division, and missed the American League Playoffs for the second straight year.